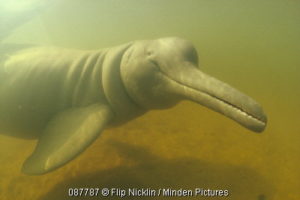 DERIVATION: probably from the Greek leipo for left behind, which refers to the restricted nature of the species' distribution; from the Latin vexillum for flag-banner, and the suffi fer for carry-bear, referring to a Chinese word that supposedly means white flag.

Dolphins are so commonly thought of as ocean-dwelling animals that many people are surprised to learn that there are dolphins who live in freshwater rivers. Listed as an international endangered species, baiji are the rarest of cetaceans with an estimated 200 to 300 remaining.

Discovered by Western scientists in the early twentieth century, recorded documentation of the baiji in China goes back at least 1600 years. Baiji were rarely killed by local fishermen who held it in reverence. However their oil was used for medicinal purposes and their meat for nourishment.

In current times though, intensive fishing, fish hooks, fish nets and lines, and industrial development have seriously eroded the baiji's habitat. It is now entirely absent from Lake Dongtinghu where sedimentation has ruined its habitat.

Their only known prey are a species of large-scaled fish and a long, eel like catfish. Baiji hunt at night or early morning in the mud at or near the bottom. Echolocation is used to locate food and fellow baiji in the muddy water.Baiji usually travel in small groups of 1 to 4 individuals and sightings occur near sandbanks and tributary junctions. Occasionally, 10 or 12 individuals are seen together.

They are believed to be slow but strong swimmers and rarely dive for more than 1 to 2 minutes.

• In appearance, baiji are similar to other river dolphins or platanistids.
• Females are larger than males.
• Their eyes are very small and degenerate, although they are believed to be functional.
• Female body length: 8 feet
• Male body length: 7.5 feet
• Calves: 3 feet at birth
• Average weight: 550 pounds
• Gestation length: unknown
• Color: blue-grey

Baiji are easily frightened and difficult to approach by motor boat. Propeller injuries are the major cause of death. They are also killed by explosives used in fishing. Six baijis were killed by a single explosion meant to clear reefs near the city of Yaohu. An injured baiji has been sustained in captivity for several years, after being treated for its injuries.

Efforts are underway by the Chinese government, scientists and national wildlife groups to protect the baiji. Plans are to relocate groups to preserves where a semi-captive breeding program could be started.

The Chinese government has begun education efforts to modify long line fishing practices and halt the illegal use of explosives in fishing. Baiji were given full legal protection in 1975, but this has not eliminated the accidental killing and the consequences of industrial development.

The efforts to work on baiji preservation are urgent.