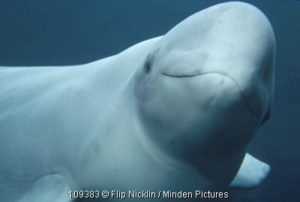 DERIVATION: from the Greek delphinos for “dolphin,” a for “without,” pteron for “fin,” and leukos for “white.”

Bird-like chirps, whistles, and squeals (listen to them here) – wherever belugas are found – the sea is alive with their sounds. Whalers gave them the name, "Sea Canaries,” and this clamor can be heard above the water's surface as well.

Physical Characteristics: Among whales, the all-white belugas have a rare ability: they can turn their head from side to side and look over or under their shoulder. This is possible because of the arrangement of seven vertebrae in their necks which are not fused together as in most cetaceans. The beluga is a robust  "blubbery" whale, with folds of fat along the belly and side, up to 6 inches (15 cm) thick that enable them to live in icy polar waters.

Belugas have a small bulbous head with a very short beak and a cleft upper lip. They lack a dorsal fin on their back, but instead have a dorsal ridge that assists them in breaking ice to allow for breathing. Lacking a dorsal fin also allows them to seek refuge from predators, like killer whales, under the fast ice. (This is ice that has frozen or fastened to coasts along the shoals, or to the sea floor over shallow parts of the continental shelf and extends out from land into sea. Unlike pack ice, it does not move with currents and wind.)

Life Cycle: At birth, belugas are creamy pale gray, and rapidly turn dark gray to brownish gray. They whiten with age, reaching a pure white stage between 5 and 12 years old. They have brown eyes. Sexual maturity occurs at about 5 years for females and 8 years for males. Calves are born in spring and summer, between April and September, while gestation lasts about 12-15 months, and lactation occurs for about 2 years. Life expectancy is not well known, but expected to be at least 40 years.

Feeding: They generally have 32 to 36 teeth that are often very worn down and in some older animals down to the gums, so they swallow their food whole. They have a diverse diet and eat various species of fish (salmon, herring and Arctic cod), a wide variety of mollusks (squid and octopus), benthic crustaceans (shrimps and crabs), and at times they even eat marine worms and some forms of zooplankton.

As referred to above, a beluga, because of its free cervical vertebrae, can move its head as few other whales can. Their small heads have a short but definite beak, overhung with a bulbous forehead (or melon). The melon shape can be changed at will, and this enables them to focus their echolocating clicks directionally and cover a much greater area while searching for prey in their turbid or sometimes dark feeding waters. Based on stomach contents, belugas feed mostly on or near the bottom in waters up to 984 ft (300 m) deep. They use their prehensile lips to create suction and pull prey into their mouths.

Behavior: Belugas, unlike their close relative, the narwhal, are slow swimmers. Their optimum speed is 11 miles (17 km) per hour, but they routinely swim at half this speed making them easy prey for orcas. They are sometimes seen alone, but typically live in groups of 2-10 individuals. They have been seen in aggregations of more than 1000, which sometimes gather in shallow estuaries. Groups are often separated by age and sex, where all-male groups and mixed groups including females and young have been observed.

Overall their group structure is very fluid and they possess one of the most diverse vocal repertoires, thus their nickname "canaries of the sea." Mariners wondered at these chirps and whistles years ago listening to the myriad sounds reverberating through the hulls of their ships. Beluga vocalizations are broadly divided into whistles and pulsed calls and are typically made at frequencies from 0.1 to 12 kHz. They have over 50 call types in the form of groans, whistles, buzzes, trills, and roars. Like other whales and dolphins, belugas are capable of producing individually distinctive calls (or dialects) to maintain contact between family groups or pods. These individual exchanges of acoustic signals, or dialogues, can be transmitted over some distance.

Distribution: Belugas live in the Arctic Ocean and prefer coastal waters of North America, northern Europe, and Russia. A large part of their year is spent near the edge of the retreating and advancing ice pack. In the summer, they can be observed in coastal waters as shallow as 3-10 ft (1-3 m) deep when they enter estuaries, like the lower St. Lawrence River of eastern Canada.

Threats and Status: The usually loquacious belugas become silent when their predators, orcas and polar bears, approach. However, polar bears are known to patiently wait at breathing holes in the ice and pull whales from the water as they surface to breathe. In addition, when the ice closes, they are sometimes trapped and starve to death or suffocate. Native hunters in Alaska, Canada and Greenland hunt belugas with rifles and harpoons.

Entanglement in gillnets and other fisheries cause death, along with habitat degradation and behavioral disturbance. Over 100 belugas have been captured alive for display at parks and for research, but a far greater danger has been pollution.

The St. Lawrence River is situated in the eastern part of Canada and is connected to the largest group of lakes in the world, the Great Lakes. The contaminants in the beluga whales mainly come from their prey species that thrive in the industrialized areas near the Great Lakes and Upper St. Lawrence. Necropsies, by Pierre Béland of Quebec, Canada, have show 24 different potentially toxic contaminants in their tissues and organs. The contaminants in the prey species bioaccumulate in the beluga whale and therefore reach high levels.The belugas in the St. Lawrence region have up to 100 times higher levels of PCB, DDT, pesticide and fire retardant than the belugas in the Arctic population. Some animals have cancerous tumors and sores and others have suppressed immune systems. The effects of ocean pollution must be addressed if whales and other animals are to survive.

This is an account of beluga hunting sent to us by an Alaska native. For obvious reasons, he doesn’t want his identity or location known.

Belugas seem smarter than I thought. I recently had a chance to work out here in remote Alaska for a while. I was invited to partake in beluga hunting. Being an Alaskan Native myself and city educated, of the non-rural type, I thought how neat and went along.

Sad. Honestly these little beings travel here in a pod of about an average of 14. I think they are all family in the pod. Well, after one is harpooned and buoyed, it is followed by the boat and followed by its other whale companions. When it slows up and cannot follow the fleeing whales, it starts screaming. I heard it through the hull of our aluminum boat. The other whales turn around and commence to attack the boat.

They butt the boat over and over, some of them getting a good 30 yards run only to run into the boat rocking us all, then seeming to kill themselves for their hurt family member. Well this is what the locals here want, a whole family to die so they can have an easy hunt.

I was told that the population of beluga here has dropped considerably, and that they have always fled the hunt. Only in recent years have they started ramming the boats. They do not seem to care that their own heads bleed after they ram the boat; they continue until they perish. The boats used here are large 30-foot aluminum double-hulled boats. It seems a shame.

The reason I wanted to tell you all this is, I may be Alaska native, but for me it was really sad. Those little things stick together to the end.