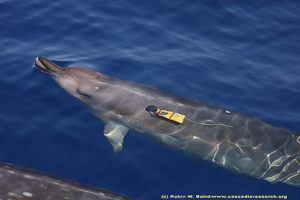 The scientific name Mesoplodon densirostris is derived from the Latin words densus for "thick" or "dense" and rostrum for "beak." Also known as the dense beaked whale or Atlantic beaked whale.

Classification: Henri de Blainville, 19th Century French zoologist named the species Delphinus densirostrus based on the description of a 9-inch piece of rostrum of unknown origin housed in the Paris Museum. Many species of beaked whales (especially those in the genus Mesoplodon) are very difficult to differentiate from one another even when dead. Blainville’s is one of 21 species of beaked whales (Hyperoodontidae or Ziphiidae), medium-sized whales. They are marine mammals within the order of cetaceans. Uncertainty regarding species identification of beaked whales often exists because of a lack of easily discernable or distinctive physical characteristics. At sea, they are not easy to observe and identify due to their obscure, wary behavior, a low profile, and a small inconspicuous blow at the water’s surface.

However, this is one of the most unique of the mesoplodont beaked whales. The posterior half of the lower jaw is highly arched even in female and calves. In adult males the arches are massive and very wide. Flattened tusks extend above the top of the lower jaw. Barnacles may cover the tusks in some individuals.

Appearance: Blainville's beaked whales are comparatively medium-sized with a spindle-shaped body and a small, wide-based, somewhat falcate dorsal fin located about two-thirds down the animal's back. Their small head has a low, sloping forehead and imprecise melon. They have small and narrow flippers and tapered flukes with no median notch. The blowhole is a crescent with the ends pointed forward; therefore the “hinge” is at the front.

Adult males have a pronounced arc to their lower jaw and it brings the jaw up to the top of the beak on either side of their head. Here they have erupted teeth that may be used in fighting. These teeth often are sheathed with a layer of barnacles. Additional teeth are nonfunctional. Females and immatures have a less pronounced arc to the jaw line and lack the erupted teeth. They may have teeth but they are hidden beneath the gum tissue of the mouth and their jaw line is less curved. 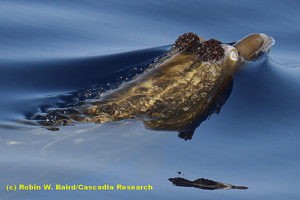 Color varies from dark gray to brownish and bluish on top and the face and underside of the animal is pale gray or white with a dark patch around the eye. The skin may appear wrinkled on the dorsal area and is covered with linear and oval-shaped scars and other markings. Paired scratches are common in what are believed to be adult males. Also, diatom infestation may discolor areas of the skin. 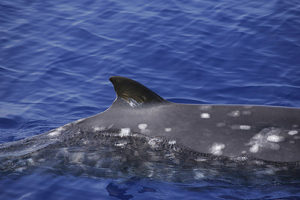 Maximum size in males appears to be 4.7 m and the same for females although females generally appear to be larger than males. Weights of up to 1,033 kg have been recorded.

Behavior: The Blainvilles has been studied more than any other Mesloplodon. There is a population in the Bahamas that is being studied in detail. This represents the second time that a beaked whale population has undergone long-term behavioral and ecological studies. Their long dives are impressive – up to 1400 m and over 54 minutes in duration have been recorded.

Blainville’s beaked whales seem to spend prolonged periods of time in the upper layer of the water column and this may be an adaptation to compensate for pushing the body’s physiological limits on these long dives. Sometimes they breach and demonstrate other aerial behaviors. When they surface they often lift their beaks out of the water and sometimes they slap them down on the water’s surface.

Distribution: Blainville’s distribution is considered the most extensive of the Mesoplodon genus. They have a cosmopolitan distribution and range from the Mediterranean, England, Iceland, Nova Scotia, Brazil, and South Africa in the Atlantic; to California, Chile, Japan, New Zealand and Australia in the Pacific. This species is commonly sighted in the northeastern Bahamas, Caribbean Sea, Gulf of Mexico, Hawaiian Islands, Sea of Japan and the Society Islands of the South Pacific. Their distribution may vary depending on the movement of the warm water currents. There are no known seasonal movements or migrations.

Behavior: Many species of beaked whales (especially those in the genus Mesoplodon) are very difficult to distinguish from one another. even when dead. At sea, they are challenging to observe and identify to the species level due to their cryptic, skittish behavior, a low profile, and a small inconspicuous blow at the water’s surface. However, this is one of the most unique features of the Mesoplodon beaked whales.

Blainville’s beaked whales are usually found individually or in small social groups averaging between 3-7 individuals, but have occasionally been seen in larger groups of up to 12 animals. Groups may consist of various combinations and/or be segregated depending on age or sex. Adult populations in productive waters over the continental shelf (like the Bahamas) may be grouped in harems and consist of several adult females with a single adult mature male (Jefferson et al. 2008). Males commonly battle over access to females, which is probably the cause of the long, linear scars seen on individuals.

Threats: Unidentified beaked whales, which may include Blainville’s beaked whales, have been incidentally taken in the pelagic drifts gillnet fishery off the U.S. Atlantic coast. Beaked whales are often undifferentiated in the field and at sea due to a lack of distinct characteristics and the difficulty of positively identifying animals to the species level.

In the Indian Ocean (off of the Seychelles and western Australia), Blainville’s beaked whales have been incidentally taken by Japanese fishing boats (Jefferson et al. 2006). They are sometimes killed or injured by naval operations using sonar. Subadult males appear to be the most at risk. This causes the animals to strand, at times over large areas of the coastline. Blainville’s beaked whales also fall victim t ocean debris, dying from its ingestion.

Conservation Efforts: The International Union for Conservation of Nature and Natural Resources (IUCN’s) Red List of Threatened Species considered this species “Data Deficient” due to insufficient information on population status and trends. 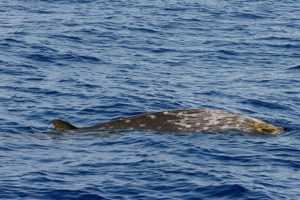