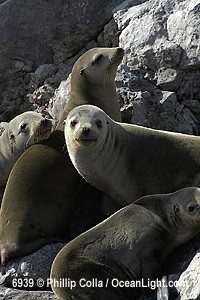 There are three subspecies of sea lions; they are sometimes considered species in their own: 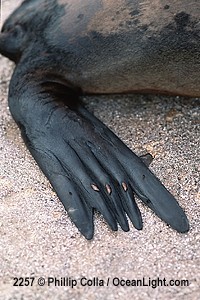 Seals, sea lions, fur seals, and walruses make up a distinctive group of marine mammals that are included in the Order Pinnipedia. Pinnipeds, or "fin foots," have flipper-like forelimbs and hindlimbs. Members of this order are divided into two main groups based on their method of locomotion: "walkers"(sea lions, fur seals, walruses) and "wrigglers" (true seals).

Pinnipeds make up over 25% of the 116 species of marine mammals, the majority of which are cetaceans (whales, dolphins, and porpoises). An estimated 50 million pinnipeds inhabit the world today. The California sea lion population is estimated at 145,000. Sea lions generally live in coastal areas, but some sea lions also travel into rivers in many areas of the Pacific Northwest.

Males are much larger than females. Harems, which include one bull and up to several dozen females, are established in spring. Males and females reach sexual maturity at 4-5 years. The gestation period is 11 months. Pups nurse from 6-12 months and weaning occurs gradually.

All pinnipeds return to land or ice to give birth and raise young. Sea lions produce fat rich milk for their pups, which is made up of 35% fat, while cow's milk and human milk contains only 2-4% fat. Female sea lions invest heavily in their offspring in terms of a long gestation period and maternal care. Females generally give birth annually but intervals between births can be two years or more in some sea lions.

This relatively inflexible rate of reproduction makes them vulnerable to commercial exploitation. Sea lions often die from becoming entangled in fishing nets and from ingesting fish hooks. Others are shot by fishermen or fed seal bombs. Whale watching boats often disturb sea lions, and commercial fisheries compete with the animals for food. Degradation of the sea lions' habitat continues in industrialized regions along the coast. 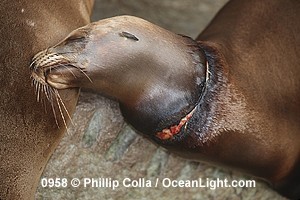 Studies on captive sea lions show that they are capable of mastering complex tasks, even possessing the conceptual ability required to comprehend simplified human language. Sea lions are exploited in zoos, circuses, amusement parks, and aquaria because of their trainability. The U.S Navy exploits sea lions' diving ability of up to 274 meters (approximately 825 feet) by having them retrieve missiles.

California sea lions do not see in color; instead they perceive objects in varying shades of black, gray, and white. They have an acute sense of smell out of water (in water, the nostrils are closed). This plays an important part in social and reproductive behavior on land. Many sea lions will stampede into the water if they catch scent of a person upwind.

Sea lions conserve heat by means of a heavy blubber layer. On land, sea lions congregate in tight groups to conserve body heat . When resting, sea lions extend both hindflippers and a foreflipper above the water's surface to conserve heat. Because of the arc formed by the flippers, sealers named this stance the "jughandle" position. Sea lions resting in this fashion are said to be "jugging."