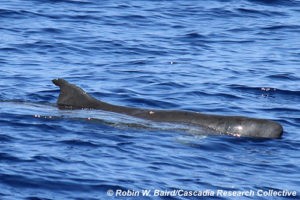 DERIVATION: from the Latin sinus for “flat-nosed.”

Pygmy and Dwarf Sperm Whales Only Members of Family Kogiidae

The species was not generally recognized until the mid-1960s. The name simus was changed to sima to reflect proper nomenclatural gender. Molecular genetic variation learned from a recent study suggests that there may be two separate species of dwarf sperm whales: one in the Atlantic and one in the Indo-Pacific.

Characteristic Shared by Pygmy and Dwarf Sperm Whales
An unusual characteristic that distinguishes pygmy and dwarf sperm whales from other cetacean species is the use of the "squid tactic." Each species has a sac filled with liquid in the lower portion of the intestine. These animals are capable of ejecting up to 13 quarts (12 liters) of viscous, dark reddish-brown liquid when they feel threatened or when trying to evade predators. Release of the ink is similar to behavior by squid and other cephalopods, and creates a dense cloud that acts to discourage predators and as a confusing diversion that allows the whale to escape. (Reeves et al. 2002).

The dwarf sperm whale is similar in appearance and behavior to its cousin, the pygmy sperm whale. Identification may be close to impossible at sea. With stranded specimens, genetic or biochemical tests may be needed for identification. However, the dwarf is slightly smaller and has a larger dorsal fin. It has a small compact body that tapers near the tail, and has a dorsal fin located midway down the back. The shape of the dorsal fin varies from falcate, or curved, and pointed to triangular depending on the individual. Sometimes, the head is described as "shark-like" due to a conical pointed snout and a small narrow distinctive underslung lower jaw. On the throat below the jaw, there may be several short longitudinal grooves or creases. The dwarf sperm whales’ snout is consistently shorter than the pygmy’s. The head shape changes with age. In young whales, the dorsal margin of the snout slopes downward anteriorly; in older whales, it is straight which gives it a squarish profile in lateral view.

Dwarf sperm whales have long, curved and sharp teeth (0-6 in the upper jaw; between 14 and 26 in the lower jaw). Because of their extremely sharp and fang-like teeth, they have sometimes been described as the “rat porpoise” in the Lower Antilles.

Their protruding eyes are dark with a light circular mark above them. Behind the eye is a pale false gill plate similar in appearance to and shaped like a shark’s gill slit. Like their larger cousin the sperm whale, dwarf sperm whales have a spermaceti organ and single blowhole situated slightly to the left side of the body. While at the surface, they have a low flat profile appearance due to the level position of the head and back. The flippers are broad, short, and located forward on the body. When closely observed, the skin has a wrinkled appearance. The skin has a brownish to bluish-gray coloration on the dorsal side; the ventral side is paler with whitish to pinkish coloration.

Life Cycle: Dwarf sperm whales become sexually mature at 2.5-5 years of age, or about when they reach lengths of 7 feet (2 m). Gestation is estimated to be 9-11 months. The calving season lasts four to five months. Pregnancy lasts for 9 to 11 months. The newborn calf is about one meter long. Males reach puberty at 2.0 m and become sexually mature at 2.1 to 2.2 m. In the Southern Hemisphere, births may occur in summer months (December-March). Newborn calves are about 3.3 feet (1 m) in length and weigh 88-110 pounds (40-50 kg). Calves are probably weaned after a year when they are larger than 5 feet (1.5 m). Females may give birth to calves in consecutive years. The estimated lifespan for this species may be up to 22 years.

Behavior: Dwarf sperm whales are usually seen in groups of no more than ten whales. Three kinds of pods are seen: one consisting of females with calves, one of immature whales, and one of adults of both sexes unaccompanied by calves. Dwarf sperm whales are rarely active or aerial at the surface, and it is very uncommon for them to approach boats. Usually they are seen slowly swimming (3 knots) or "logging" (floating motionless) at the surface with only a small portion of their body visible. Before diving, they will slowly roll or sink and disappear from view without displaying their flukes. This species is very difficult to visually spot at sea given their timid behavior, lack of a visible blow, and low profile/appearance in the water. They are usually only detected in calm seas and low wind speeds with little or no swells.

There is inconclusive evidence that dwarf sperm whales are capable of diving to at least 1,000 feet (300 m) to reach their food. They also probably use echolocation to search for prey. Based on the structure of their lower jaw and analysis of stomach contents, they probably feed on or near to the ocean bottom.

In the Northern Hemisphere, their range includes Oman, Persian Gulf, the Maldives, Japan, British Columbia, California, Gulf of California, Gulf of Mexico, southeastern U.S. and northwestern Europe (Shirihai and Jarrett 2006). Around the Hawaiian Islands, dwarf sperm whales are the sixth most commonly sighted odontocete (toothed whale). The seasonality and migration patterns of this species are unknown. Much of the information on distribution and biology is based upon stranding records for this species.

Population Trends: For management purposes, dwarf sperm whales inhabiting U.S. waters have been divided into four stocks: California/Oregon/Washington Stock, Hawaiian Stock, Northern Gulf of Mexico Stock, and Western North Atlantic Stock. The estimated abundance for dwarf and pygmy sperm whales is about 300-400 animals for the Western North Atlantic stock, and 600-750 for the Northern Gulf of Mexico stock. The estimated abundance for dwarf sperm whales in the Hawaiian Islands Exclusive Economic Zone (EEZ) is 11,000-19,000. No population size estimate exists for the California/Oregon/Washington stock. In the eastern tropical Pacific, population is estimated at 11,000 animals. Data is insufficient for this species to determine the population trends.

Human Interaction: The dwarf sperm whale was actively hunted by commercial whalers in the past. Occasional harpoon kills are still made by Indonesian and Japanese fishermen. Since the dwarf is more coastal than the pygmy, it may be more vulnerable to human activities such as fishing and pollution. Insufficient data exists as to whether such activities threaten survival of the species.

Threats: Dwarf sperm whales are entangled, incidentally taken, and interact with a number of fisheries, including drift gillnets. This species was occasionally killed by hunters targeting sperm whales during the 19th century and has been recently killed in commercial harpoon and drive fisheries in Indonesia, the Lesser Antilles, and Japan (Jefferson et al. 2008). Due to their coastal and nearshore distribution, dwarf sperm whales may be susceptible to human activities and pollution.

They are vulnerable to ship strikes because of their behavior of logging motionless on the sea’s surface. Marine debris may also pose a threat to dwarf sperm whales as some stranded animals have ingested plastic and other garbage, which blocked their intestinal tracks (Reeves et al. 2002). Stranded specimens have had degenerative heart disease, immune system problems, and heavy parasite infestations. Underwater sounds and anthropogenic noise may be harmful to this species of deep-diving whales.

Regulatory Overview: This species is protected under the Marine Mammal Protection Act of 1972 as amended.