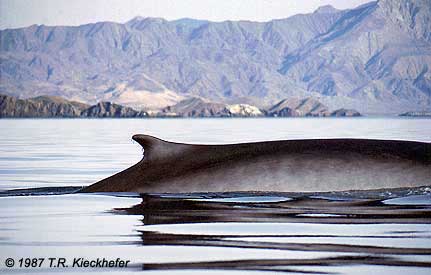 Also called Razorback, Finner, Finback, Common Rorqual, and the Greyhound of the Sea.

The fin whale is second in size only to the blue whale, the largest whale at 100 feet.  For an animal that weighs up to 80 tons and may reach a length of 80 feet, the streamlined fin whale is an amazingly swift swimmer.  It swims at 5-15 miles an hour with faster bursts of speed.  One fin, radio-tagged off of Iceland, traveled 1860 miles in 10 days or approximately 200 miles per day.

The fin is a remarkably deep diver and can reach depths of up to 700 feet.  Unlike blue or sei whales, they do not show their flukes when beginning a dive, although they may arch their backs and raise their tail stock. The back has distinct ridges from the dorsal fin to the flukes which accounts for the name “razorback.”

The fin whale’s most distinctive feature is their unique coloring which is unlike any other whale. Its color is light gray to brownish black on its back and sides.  It has lighter colored chevrons which begin behind the blowholes and slant down the sides towards the tail before turning and ending right behind the eye.

The right lower lip, including the mouth cavity and right front baleen, are white or yellowish-white.  Remaining baleen plates on the right and those on the left are striped with alternate bands of yellowish white and bluish gray.

The purpose of this unusual coloration is thought to play a part in fin feeding strategy. They have been observed swimming toward their prey, rolling on their right side, pivoting in a tight turn, and opening their mouths.  Perhaps this allows the whale to take advantage of its white side to scare and concentrate fish. Fins eat an assortment of foods, including krill, fish and squid.

Sexual maturity occurs between 6-10 years of age.  After a 12-month gestation period, females give birth every two to three years to a 20-foot, two-ton calf which is weaned between six-eight months.  Most mature animals are in the 70-80 foot range, with females slightly larger than males.

Fins are usually found in small pods of 3-7 animals, but single animals have also been observed. They may form groups of 100 or more on feeding grounds.

Fin whales have a worldwide distribution.  They move  toward both poles in the spring and to warmer waters in the fall, as do most other large baleen whales.

Unlike blue or sei whales, fins occasionally breach.  They do not re-enter the water headfirst and smoothly, but with a big splash. Their cone-shaped blow is very tall, 15-20 feet, and can be seen from a great distance.

Fin whales’ natural enemy is killer whales (orcas).  Fins  did not become an important commercial whale until the early 1950s with the development of fast catcher boats. After the severe depletion of the blue whale, especially in the Antarctic, whalers turned their sights on fins, reducing their numbers in most areas. Their present population is estimated at 40,000 in the northern hemisphere and 15,000 to 20,000 in the southern hemisphere which is a small percent of their original population.

Nic and Wendy Slocum conduct whale and dolphin watching tours off the west coast of Ireland, whalewatchwestcork.com. In the early morning of January 15, 2009, they were called out to Courtmacsherry Bay as a fin whale had come inshore and was about to strand. A member of the public notified them at 9 a.m. and reported that the whale was "coming inshore on the tide but alive”. When the Slocums arrived at 10:30 a.m., the whale had already stranded on a sandbank. It appears to have died shortly thereafter.

At low water, Nic was able to wade out to the whale. The sex of whale was not determined, but he said it was a mature adult and probably in the age range of 40 to 50, slightly underweight and 64 feet long.

Nic Slocum, BSc, PhD, is a lifelong conservationist, and a passionate exponent of sustainable marine development. Whale Watch West Cork is committed to the educational value of whale and dolphin watching in enabling the sharing of the wider marine conservation message with as many people as possible, especially the young.

Coastal waters off the southwest of Ireland are a summer feeding ground for a number of whale species and a year-round home for several resident dolphin species including the harbor porpoise. Baleen whales commonly seen off the south coast include fin and minke whales, which makes whale watching in Ireland some of the best whale watching in Europe.

The picturesque village of Courtmacsherry lies midway between the old head of Kinsale and the Seven Heads on the rugged West Cork coast of Ireland. 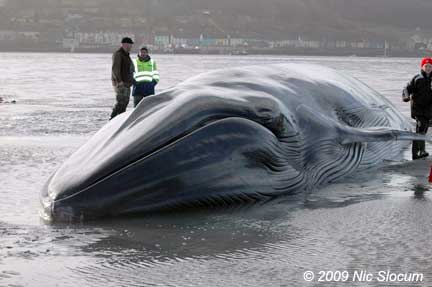 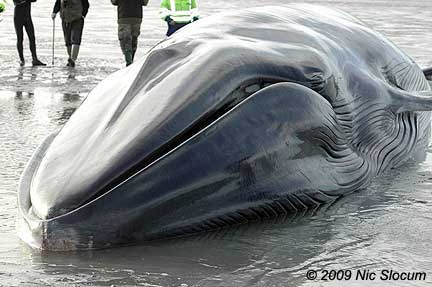 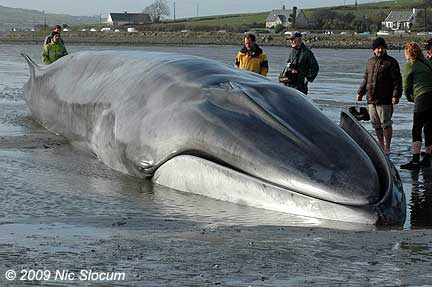