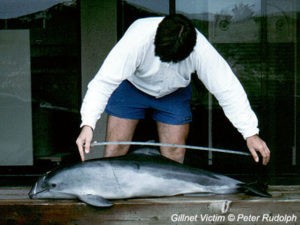 The harbor porpoise, with an average size of 1.5-1.6 m and weight of 45 to 60 kg, is one of the smallest cetaceans in the world. Unlike the more gregarious Dall's porpoise (Phocoenoides dalli), which can be seen riding the bow wakes of boats, harbor porpoises often avoid oncoming vessels.

Harbor porpoises were once common throughout the San Juan Islands, Washington, but over the past 20-30 years, their numbers have been declining. Some theories suggest the decline may be due to increased development pollution within the main sound, increased boat traffic, or incidental catch of porpoise in gill net operations.

Although there have been a few studies of the west coast harbor porpoise population, little research has been done on harbour porpoises of the Pacific Northwest. I feel there is a need to know what type of environment is important to harbor porpoises in order to help sustain their population.

Therefore the objectives of my study are to: locate areas of concentration of harbour porpoise in the San Juan Islands; determine if their distribution is correlated with certain environmental variables such as water depth, bathymetry, tidal rips, water temperature, turbidity, boat traffic, associated bird and mammal species, presence of prey species, etc.; and to record respiration rates and behaviors of individuals and groups.

Harbor porpoises are observed from both boat transects and shore-based operations. Each boat transect is 8 km long and is run at approximately 11 km/hr. Transects are located in waters surrounding the northwestern San Juan Islands. Due to the difficulty in observing this small cetacean, transects are only run when the visibility is good and wind speed is less than four knots.

During the summer 1991 field season, harbour porpoise were located on 70% of the 33 surveys completed, with a group size ranging from one to three animals. Behaviors observed included traveling, milling, porpoising, and pop-splashing (porpoise belly flops). Porpoise were most often observed traveling (72% of the time), were found at an average depth of 130 m and at an average surface temperature of 12 .7 Celsius.

From shore-based observations, milling was the most common behavior observed (70% of the time) with as many as eight individuals in a group. Cow/calf pairs were observed on several different occasions. Respiration data was recorded for groups, individuals, and cow/calf pairs. By using respiration data to determine the amount of time porpoise spend at the surface, a correction factor will be developed to be used for aerial censuses of harbor porpoises. Based on these aerial censuses, researchers can then estimate the San Juan Island harbor population and better determine trends in population size over the years.

During the summers of 1992 and 1993, I plan to continue gathering data on harbour porpoises and would like to extend my study area to include a greater portion of waters surrounding the San Juan Islands.

I would like to thank Save The Whales, National Marine Mammal Lab, Washington Department of Wildlife, and The Whale Museum for their help in providing equipment and/or financial support during the 1991 summer season.