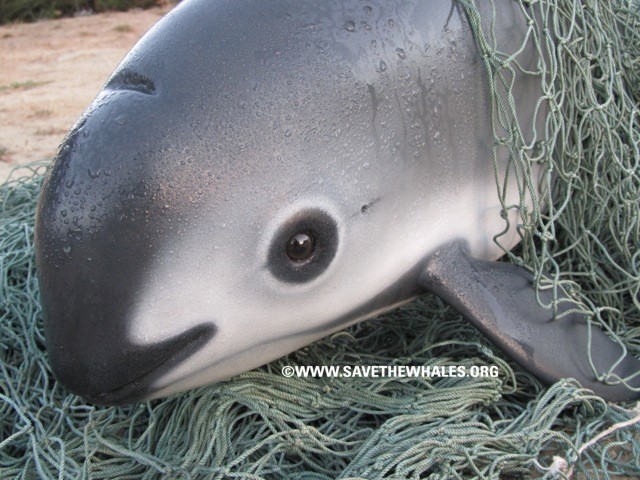 The vaquita (Phocoena sinus, often previously called the Gulf of California harbor porpoise) has been recognized as a rare and vulnerable species since its scientific discovery fifty years ago. There are a number of potential threats facing the species (including habitat alteration by the drastic reduction of freshwater flow of the Colorado River), and its limited range in shallow waters of the upper portion of Mexico’s Gulf of California is considered to be the smallest of any marine cetacean.

Although there is some controversy about the seriousness of other potential threats, without a doubt the primary threat facing the species is incidental kills in various fisheries, mainly in several gillnet fisheries. In fact, this is the only well-documented threat to the population, and studies on bycatch have given clear indications that the kills are unsustainable and undoubtedly causing the small population to decline.

The vaquita is listed as Critically Endangered (facing an extremely high risk of extinction in the wild) by the IUCN Red List authority, and has received a great deal of attention within the IUCN Cetacean Specialist Group, and the International Whaling Commission’s Small Cetacean Subcommittee. There is widespread acceptance within the marine mammal community of the extremely serious situation that the species is in, and for many years it has been considered the second-most endangered cetacean species, after the baiji (Lipotes vexillifer) of China’s Yangtze River.

With the recent discovery that the baiji is functionally-extinct, and probably extinct in absolute terms, the vaquita is now recognized as the most-endangered cetacean species in the world. Based on abundance estimated in 1997, there are estimated to be only 245 vaquitas remaining in 2008 and now there are only 60. Based on expected levels of decline, this means there is a window of about two years in which to implement solutions to save the species. After that, it will likely be too late. 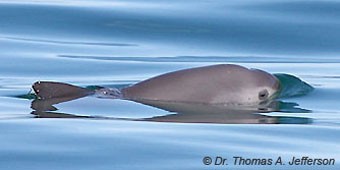 The above photo was taken under permit (Oficio No. DR/488/08 from the Comisión Nacional de Áreas Naturale Protegidas (CONANP/Secretaría del Medio Ambiente y Recursos Naturales (SEMARNAT), within a natural protected area subject to special management and decreed as such by the Mexican Government. This work was made possible thanks to the collaboration and support of the Coordinador de Investigación y Conservación de Mamíferos Marinos at the Instituto Nacional de Ecología (INE).

In recent years, there been virtually unanimous agreement among researchers and conservationists examining the issue that what is needed to save the species is complete elimination of gillnet mortality. The International Committee for the Recovery of the Vaquita (CIRVA) has convened three times to discuss the species’ situation, and has come to the same conclusion. Some limited progress has been made towards closing down the gillnet fisheries that threaten the vaquita, but not surprisingly this has proven challenging, and many fishermen and fishing collectives have been resistant. It is now clearly seen that the only hope for the species is a program that eliminates gillnets, while at the same time providing economic incentives and aid to the affected fishermen to find alternative sources of income. What is currently needed is the public support to raise the several million US dollars needed to implement the plan.

Current efforts to raise public awareness and conserve the vaquita are being seriously limited by the absence of photo or video images of the animals alive in their natural habitat. Green groups often successfully use images of wildlife to focus their fund-raising efforts and obtain sympathy for endangered species (a clear example is the giant panda, in which images of this large, attractive animal were instrumental in gaining sympathy for its effective conservation).

This has been difficult with the vaquita, which is also a large, attractive animal (and with a unique appearance, quite different from any of the other seven porpoise species). Few people realize this, however, as the best available images are blurry, distant photos showing only a back and dorsal fin (and in one case, the top of the head). There have even been claims from within Mexico that the vaquita is not real - a ‘mythical creature,’ further hampering conservation efforts. I believe that showing the world what the vaquita looks like, alive and in its natural habitat, will be critical to efforts to raise the funds needed to save the species.

During October and November 2008, the Southwest Fisheries Science Center and Mexico’s Instituto Nacional de Ecologia will use several research vessels to conduct an acoustic survey for the vaquita in the upper Gulf of California, Mexico. The goals of these larger vessels will be mainly to collect data for developing acoustic monitoring methods, and as vaquitas are known to avoid large vessels at great distances, it is not expected that any of them will be able to get close enough to vaquitas to obtain good photos.

With funding from an anonymous donor, I am leading a project to obtain photos of vaquitas. My coworkers and I hope to obtain several high-quality images of vaquitas engaged in a variety of normal activities (i.e., ‘publishable’ photos). We hope to obtain clear images that show the head and face of these attractive and unique animals, which will be instrumental in garnering sympathy for the cause of their conservation. In addition, we hope to be able to identify individual porpoises from photographs, and therefore to learn more of the species’ biology and current population size.

The management implications of this project are potentially profound. It is our belief that the lack of suitable images of living vaquitas is a major stumbling block to saving the species, and we hope to rectify this situation with your support.

The vaquita, or Gulf of California porpoise, is now the world’s most critically endangered cetacean species. The cause is incidental mortality in fishing gear, and the future of the species is uncertain.

It is among the smallest of marine cetaceans. Like similar phocoenids, it has a taller, more falcate dorsal fin and larger flippers. The dorsal fin more closely resembles that of a dolphin rather than a porpoise. It resembles other porpoises in that it is stocky with a blunt beakless head.

When seen from a distance the vaquita may be confused with bottlenose and other long-beaked common dolphins, both of which are in the vaquita’s range. The small size of groups, its unique body shape (no prominent beak), as well as its behavior, distinguish it from other cetaceans.

Color pattern is unique with distinct black to dark gray lip patches and eye rings. The body is light brownish-gray with a whitish belly and a chin to flipper stripe. Calves are usually darker than adults.

Their life history seems to be similar to other more closely studied species of porpoise. Sexual maturity in females is between 3 and 6 years and males are assumed to be similar. Most calves are born in the spring (around March) and gestation is about 10-11 months. A female appears to give birth about every other year. Maximum known longevity is 21 years.

The vaquita is distributed in the relatively murky, shallow waters in the northern quarter of the Gulf of California near the estuary of the Colorado River. There is some suggestion that the range may have extended further south in the Gulf. The animals are usually sighted in the western portion of the upper Gulf between San Felipe Bay and Rocas Consag.

Of the 34 stomachs studied, the contents indicate opportunistic feeding on a wide array of fishes, squids and crustaceans.

The estimated mortality from gillnet fishing is at least 39 and perhaps as many as 84 vaquitas per year. This is unsustainable as the most recent estimates of total abundance for the vaquita was 245 animals in 2008. The population has been declining since the 1940s and may be declining by 8% a year.

Attempts to conserve the vaquita are being made through the creation of a biosphere reserve and a wildlife refuge that includes waters outside the reserve in the upper Gulf of California. The Mexican government has formed an international recovery committee team to plan to save the vaquita, and the Southwest Fisheries Science Center in La Jolla, CA has three members on the team (B. L. Taylor, J. Barlow and R. L. Brownell, Jr.). They are actively collaborating with Mexican colleagues, using science to help them choose appropriate recovery strategies.

For more information on the Vaquita and how you can help this endangered species, visit: 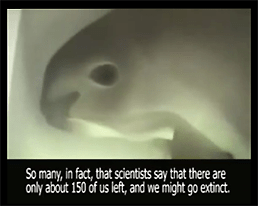 Marine Mammals of the World, 2nd Edition
A Comprehensive Guide to Their Identification