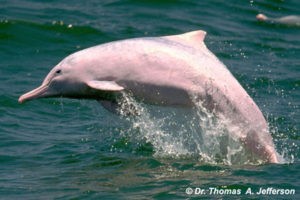 DERIVATION: chinensis refers to China and Sousa for not discovered.

The Indo-Pacific hump-backed dolphin is an uncommon resident of the coastal waters of the Indian and Pacific Oceans. They are usually found near shore in tropical waters. They do not bowride and do not seem attracted to boats.

Its head somewhat resembles that of the bottlenose dolphin, although its beak is relatively longer and its melon not so pronounced. There is often a thick elevation or hump in the middle of the back of adults, and the smalltriangular dorsal fin appears to rest on this raised platform. It appears that Atlantic humpbacked dolphins and Indopacific humpbacked dolphins found approximately to the west of Indonesia have the hump, but those to the east do not. When present, the hump is very noticeable when the animal arches its back to sound.

The animal is basically gray, but its coloration can differ greatly depending on its region. The dolphin recently rescued from the tsunami had a distinctive pink and gray fin. They have been studied in some detail off of South Africa where young calves are pale gray to off white deepening to grayish early in life.

When not disturbed, they swim slowly surfacing about every minute. They usually ascend swiftly to the surface, often exposing their snout and head, then flex forward, accentuating their hump as they sound.

They feed on fish: sardines, mackerel, and mullet, among others.

Small numbers have been taken for food and oil in the Red Sea and Arabian Sea Gulf and their meat is consumed on the southwest coast of India.

Much of what is known of the dolphins comes from experience with them in the Indian Ocean. They are often found singly or in pairs, though groups of 12 to 20 are not unusual. The average group off South Africa consists of about six individuals. No obvious segregation by sex or age is found within populations. Social bonding does not appear to be particularly strong, with individuals moving among groups. There is some evidence that small groups are part of larger “schools” that maintain their identities for long periods of time. Humpbacked dolphins are frequently seen near bottlenose dolphins and finless porpoises.

The Indopacific humpback dolphin is widely distributed in coastal and inshore waters of the Indian and western Pacific Oceans. The dolphin prefers warm temperate and tropical latitudes. It has been seen from the southern tip of Africa northward among the east cost of the Indian subcontinent, through much of Indonesia, Australian coastal waters, and from Borneo northward along the Indo-Chinese coast to the Canton River.

They may be confused with bottlenose dolphins which share their entire range.

Edwin Wiek of The Wildlife Friends of Thailand said there are about 500-600 Indopacific humpback dolphins near Thailand that migrate between the Indian and Pacific oceans.

A man searching for his missing wife spotted two dolphins in a small lagoon generated by the Asian tsunami that swept over a Thai beach near Kao Lak. The trapped dolphins were Indopacific humpback dolphins.

The dolphins came in with the initial wave and when the water retreated, they couldn’t get back again because they were separated from the ocean by a beach. They needed to be returned to the sea as quickly as possible, as they were slowly being poisoned by the stagnant water, which was polluted with debris and dead bodies.

Edwin Wiek, a Dutch national who has worked in Thailand for more than a decade, was actively involved in the rescue effort from the beginning in cooperation with Khun Kongkiart and local villagers. With no fish to feed on, Wiek was concerned that they might only be able to survive for a few days but not longer. He said, “We need to get them out.”

As hope was fading to find human survivors, the discovery of the dolphins energized workers. Teams of about two dozen Greek divers tried to corner the dolphins in what used to be a small valley. The goal was to get them into large nets so they could be hauled back to sea. After a failed attempt, the rescuers believed the nets were too small and broadcast an appeal to fishermen to bring larger nets to the isolated area. The dolphin was finally trapped and lifted out of the water on January 5th, placed on a stretcher, put in a pickup truck, and driven the short distance to the water’s edge.

Wiek injected the dolphin with antibiotics and treated a gash on her side before releasing her. After being lifted into the Andaman sea, the dolphin swam swiftly away without a backward glance. “She swam away like a rocket. It was fantastic,” said Wiek. The calf accompanying her was not found and is presumed dead.