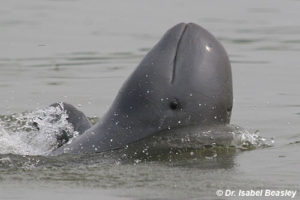 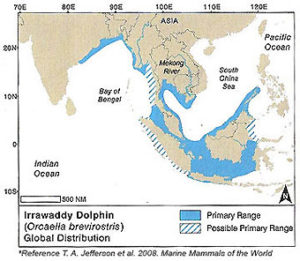 As a result of intense competition with humans for freshwater resources, freshwater Irrawaddy dolphin populations are some of the most endangered of all cetacean species. Irrawaddy dolphins, Orcaella brevirostris are found in localized coastal/estuarine regions around Southeast Asia, with riverine populations in the Mahakam (Indonesia), Ayeyarwady (Myanmar) and Mekong (southern Laos, Cambodia and Vietnam) River systems. The Irrawaddy dolphin subpopulation in the Mekong River (hereafter referred to as the “Mekong dolphin population”) was classified as “Critically Endangered” by the World Conservation Union (IUCN) in 2004, and is thought to be declining rapidly.

The Mekong dolphin population is now restricted to the upper 190km (190km = 118.06 miles) of the Cambodian Mekong River, from Kratie north to the Laos/Cambodian border. Photo-identification studies have shown that the total population was an estimated 127 individuals in 2005, as may now be as few as 86 individuals. The main problems facing the population are unsustainable newborn mortalities; accidental gillnet entanglement; and dolphin-watching tourism. 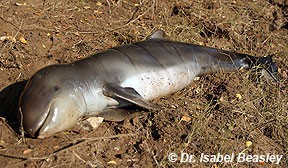 During dedicated studies conducted from 2001-2005, only two calves were known to survive past the first few weeks of life (these two calves were born in January 2004 and were still alive as of April 2005); all other newborns observed in the river were found dead within weeks of being sighted. These unsustainable newborn mortalities have continued in recent years, with 16 newborns found dead in 2006 and nine in 2007. WWF-Cambodia now have a dedicated Mekong dolphin veterinary program in an attempt to determine cause of death, however no definitive answers have yet been found. 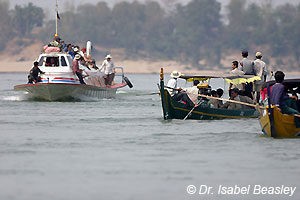 As with many cetacean populations gillnet entanglement is a known problem, and has contributed to at least half the known adult mortalities. In 2005, the Cambodian Government decreed that the Kratie to Lao/Cambodian border river stretch would be a gill-net free area, in a well-intentioned attempt to conserve the remaining dolphin population from a major source of anthropogenic mortality. Unfortunately, there was no prior consultation with the local communities along the river, who commonly use gillnets for subsistence fishing. Additionally, no alternative livelihoods were provided (except independently by a local Cambodian NGO in only two villages), or gear modification trials conducted, before this legislation came into effect. These well-enforced initiatives have inevitably alienated the local people, despite the communities’ positive perceptions towards dolphins and demonstrated willingness to participate in small-scale management efforts previously initiated by dolphin conservationists. 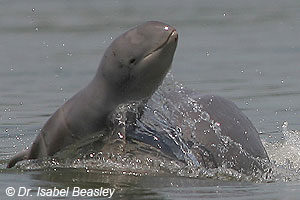 Dolphin-watching tourism occurs in two areas of the river, and based on results of other dolphin-watching studies around the world are no doubt having significant impacts on targeted populations. Irrawaddy dolphins inhabit the same small deep-water pools for most of their lives (some pools no larger than 2km x 2km, 2km = 1.24 miles). The noise and harassment from daily dolphin-watching tourism in small motorised boats affects all dolphins inhabiting the small, confined pools, and may be one of the factors responsible for the high newborn mortality. As an example, In Kampi Pool near Kratie Township, there are at least 20 small boats operating in the 1 km x 1 km (1km = 0.62 miles) pool during the dry season. There is minimal management of this tourism; no educational/awareness information provided to tourists; no benefit to the targeted dolphin groups; and despite outside appearances, very little revenue goes back to the local community. An international awareness campaign is therefore planned to encourage international and national tourists to view the dolphins from land (easily viewed during the dry season), rather than hiring boats to view them.

Additional large-scale conservation concerns for the Mekong dolphin population result from various sources of habitat degradation (e.g., large scale dam construction; contaminants from industry and agriculture; and conversion of natural habitat to farmland), disease, reduced prey, and loss of genetic diversity. Even with the most comprehensive management plan accepted by all stakeholders, dolphins will not survive in the river if adequate habitat is not available. Dolphins rely on deep-water areas during the dry season and annual fish migrations to replenish fish stocks. The construction of dams along the mainstream lower Mekong River (particularly southern Laos or Cambodia), will no doubt substantially increase the risk of the Mekong dolphin population’s extinction. 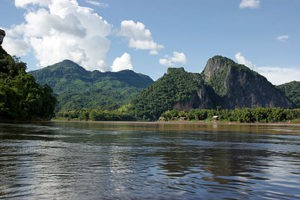 On a more positive note, dedicated efforts to conserve the remaining population are continuing by WWF-Cambodia, with recent assistance and advice from the IUCN Cetacean Specialist Group and associated researchers. If it is not already too late to conserve the remaining dolphin population, with effective in-situ conservation and management, Irrawaddy dolphins could serve as a flagship species for conservation of the Cambodian Mekong River stretch from Kratie to the Lao/Cambodia border, which is a biologically diverse, highly important ecosystem for a number of endangered flora and fauna species.