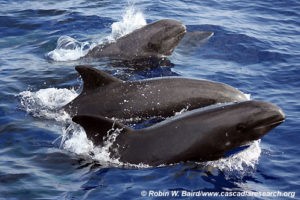 DERIVATION: from the Greek pepon for “melon, gourd,” and keplale for “head”; Electra was a nymph of Greek mythology.

Characteristics: Melon-headed whales belong to a group of small, dark-colored whales often referred to as “blackfish.” Its color is primarily dark gray with a faint darker gray dorsal cape that is narrow at the head and dips onto the side as a downward pointing triangle just below the tall, falcate dorsal fin. Areas above the anus, genitals, and lips are sometimes unpigmented and appear light gray, white or pink. Also, there is a light gray hint of an anchor-shaped throat patch. Its coloration is subtle and can only be seen in proper lighting. This whale is distinguished from other blackfish by its small slender high tooth count: 20-25 in upper jaw; 22-25 in lower jaw. Males are larger than females and have comparatively longer flippers, taller dorsal fins, broader tail flukes and are more robust.

At sea, they are difficult to distinguish from the pygmy killer whale, but the melon-headed differs by having a more pointed or triangular head and sharply pointed pectoral fins. These characteristics are difficult to determine at sea unless the animals are seen from above.

Life Cycle: At birth they measure about 1.1 m in length. They continue to grow until they are 13-14 years old. Females reach sexual maturity at about 11.5 years and a length of about 234 cm. Males seem to mature at about 15 years. They reach a maximum of about 2.78 m with males reaching somewhat greater lengths than females.

Feeding: Their preferred food appears to be squid but they also eat small fishes and shrimps.

Behavior: Often, they are found in large aggregations. They are highly social animals and typically travel in large groups of several hundred and up to 2,000 individuals have been seen traveling together. The whales are tightly packed and make frequent and rapid changes in direction. This behavior separates them from the very similar pygmy killer whale. They are often seen in large mixed aggregations with Fraser’s dolphin and have been viewed in mixed herds with spinner dolphins, common bottlenose dolphins and rough-toothed dolphins. They will bow-ride on the bow wave of passing ships in some areas, but avoid ships in the eastern Pacific. If the ship’s speed slows to a knot or less, they will ride for longer periods. They can move at high speed often porpoising out of the water regularly

Distribution: Melon-headed whales are found worldwide in tropical to subtropical waters. Occasionally seen in higher latitudes, these sightings are associated with incursions of warm water currents (Perryman et al., 1994). They are rarely found near shore, unless the water is very deep.

Threats and Status: In the North Pacific, strandings of melon-headed whales are becoming more common (Brownell et al., 2006). Indications from two strandings - one in Japan and the other in Brazil – revealed that some specimens had high levels of internal parasites which might have caused some animals to strand. A panic response might be a cause in these highly-social animals. In 2004, a stranding in Hawaii was probably the result of active sonar transmissions from military vessels (Southall et al., 2006).

They have been taken in various fisheries by direct killing in drive fisheries in Japan and harpoon/driftnet fisheries in the Caribbean, Sri Lanka, the Philippines and Indonesia. In addition, they are sometimes trapped in tuna purse seine nets in the eastern tropical Pacific. Abundance estimates are about 45,000 animals in the eastern tropical Pacific and 3,000 in the northern Gulf of Mexico. Current population estimates for the different U.S. stocks are: Hawaii - 2,950; Western North Atlantic - unknown, only two sightings have been made, but these did not occur during population size surveys.

Melon-headed whales are considered of Least Concern in the IUCN Redlist. There are no known conservation efforts directed specifically at this species, as they are poorly known and have few fishery interactions or other known threats. This species is protected under the Marine Mammal Protection Act of 1972 as amended. 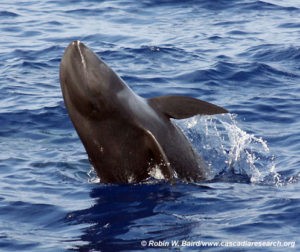