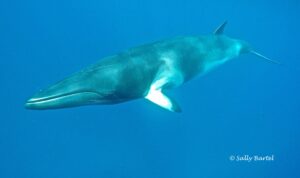 DERIVATION: from the Latin acutus for sharp-pointed and rostrum for beak-snout.

The minke whale is the smallest of the baleen whales. It can reach a length of 33.5 feet, but most minkes are smaller. They are found worldwide and frequently seen as single animals, pairs or trios, although they may congregate in areas of food concentration in the spring and summer in polar sea regions. Schools of several hundred have been reported in the Antarctic.  In all areas, they seem to separate by age and sex classes more than any other baleen whale.

Its common name is pronounced “minky.”  The story is told of a German whaler named Meineke (or Meinecke).  He mistook one of these small whales for a blue whale – to the amusement of his fellow whalers - and from then on whalers called them “Meineke’s whale,” which turned into “minky.”

The coloration of all minkes is dark gray or black above and white below with much variation on how the two colors come together.  The northern-and southern-hemisphere minke whales differ in several ways.  Sometimes they have a chevron on the back behind the head and they often have two regions of light gray on each side: one just above and behind the flippers and another just in front of and below the dorsal fin.

The northern mammals have a distinctive white band on the flippers, and the southern ones do not.  Some southern animals have white baleen only toward the front of their mouth with the remainder being dark. The northern whales have mostly yellowish white baleen with fine, white bristles.  Some of the white plates have black streaks with the most posterior plates sometimes being all dark. Baleen plates number between 230 to 360 with 300 being the average number.  They have small heads and a curving dorsal fin.

The minke is the only rorqual or baleen whale that can leap entirely out of the water.  It  re-enters the water like a dolphin, headfirst.  The larger whales typically leap about three-quarters out of the water.  They then twist on their axis prior to re-entry which is believed to protect their internal organs from the shock of their huge bodies hitting the water.

Minkes can swim close to shore and often enter bays, inlets and estuaries.  They frequently arch their tail high above the surface when beginning a long dive, but they do not raise their flukes above the surface.

They are preyed upon by orcas especially in certain parts of the southern hemisphere.  As the larger whale species were decimated by whaling, the minkes proliferated.   When minkes were the only whale left to hunt, Japan and other countries increased the quotas that could be killed.

The moratorium on commercial whaling took effect in the 1985-86 season, and minkes have been killed since then under “scientific” permits.

Their numbers are currently listed as 149,000 in the North Atlantic, 25,000 in the northwest Pacific and Okhotsk sea.  But in the Southern Hemisphere where most of the hunting takes place, the International Whaling Commission (IWC) states on their website that they are unable to estimate their numbers.