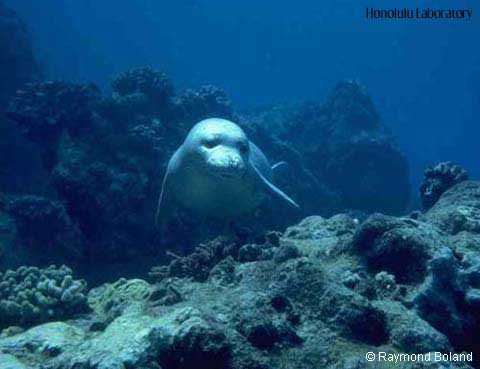 The genus Monachus includes two endangered species. They live in the world’s tropical and subtropical seas in the Northern Hemisphere. The two are the Mediterranean monk seal, M. monachus, and the Hawaiian monk seal, M. schauinslandi. The Caribbean monk seal, M. tropicalis, now extinct and last seen in 1952, once was widely distributed around the Caribbean.

Monk seals originated in the North Atlantic. The Hawaiian species is probably of Caribbean origin at least 15 million years ago from across the Central American seaway (Repenning and Ray, 1977). The Hawaiian monk seal is known as the most primitive of living seals.

Hawaiian monk seals are known to native Hawaiians as Ilio-holo-i-ka-uaua, or "dog that runs in rough water." Its scientific name is from Hugh Hermann Schauinsland, a German scientist who discovered the skull of an animal on Laysan Island in 1899. The name “monk seal” comes from the short hairs on its head, said to resemble a monk.

Mediterranean monk seals are uniformly black at birth with a conspicuous white ventral patch unique to each seal and distinct in shape by sex (Samarach and Gon?alez, 2000). Seals of all ages that are newly molted are silvery gray dorsally and lighter ventrally with the ventral patch pattern persisting through life. At 70 days old, pups are completely molted. The Mediterranean monk seal averages 2.4 m in length (nose to tail) and is believed to weigh 240-300kg. Females are only slightly smaller than males. When born, pups measure 88-103 cm in length and weigh 15-20 kg.

Hawaiian monk seals are also black at birth with some showing small white patches at various sites. After molting, these seals are also silvery gray with the fur color changing in juveniles to a yellow-brown prior to the next molt and darkening through the year in adults. The Hawaiian monk seal is known for its epidermal molt, as part of the hair is shed attached to layers of skin. Hawaiian monk seal females reach a length of 2.3m and weigh up to 273kg; males are slightly smaller, measuring up to 2.1m and weighing about 230kg.

Hawaiian monk seal births usually occur from February-August and peak in April-June but births are known in all months. They are weaned at 6 weeks at which time they weigh 50-100kg. During lactation, female Hawaiian monk seals do not forage. After weaning, pups of both species survive on fat reserves while they learn how to catch prey. The average interval between annual births is 381 days. Because of this, females give birth later and later until a year is reached where they do not give birth but then they will cycle earlier and give birth the following year.

Mediterranean monk seals give birth year-round, but mainly in the summer through early winter. The breeding interval is approximately one year.

Monk seals have a highly diverse diet of fish, octopus, squid and lobster (Goodmanlowe, 1999). Their diet varies according to location, season and age of the seals.

Hawaiian monk seals have a broad diet range of at least 40 species. Foraging takes place in their resident atolls and along the fringing reefs. If food is scarce, they may forage at reefs 60-200 km from their breeding islands and at sea mounts to depths of 500m.

Mediterranean monk seals are mainly benthic feeders and may regularly reach bottom depths in the wide continental shelf like the western Sahara.

Unintentional Pup Swapping: When Hawaiian monk seal mother-calf pairs are near each other, accidental pup exchanges sometimes take place. This can have dire consequences for the pups as they may be of different sizes and ages when they began suckling with a mother other than their own. If the pup is small and the mother is going to end lactating at six weeks, then the pup could die. It could also result in a larger pup who has been fed beyond the normal rate. Mediterranean monk seals may foster pups from mothers from whom they are lost or if they were discarded.

Hawaiian monk seal: Found in the Central Pacific, monk seals are established in the mostly uninhabited northwestern Hawaiian Islands (Ragen and Lavigne,1999). There is a small breeding population on the main Hawaiian Islands. Rare monk seals sightings have been reported south of the Hawaiian Archipelago at Johnston Atoll, Wake Island and Palmyra Atoll. Monk seals will usually remain at the island of their birth. Low genetic diversity is also found in this species of around 1200-1300 seals.

Mediterranean monk seal: In the past, the Mediterranean monk seal was found in the entire Mediterranean Basin and the southeastern North Atlantic from the Azores Islands to near the equator. At present, their distribution is abbreviated and disjointed. A population of approximately 250-300 is in the Eastern Mediterranean on the islands in the Aegean and Ionian Seas, as well as along Greece and Turkey coasts. In the Atlantic, only two breeding populations are known: one is at the Cap Blanc peninsula in the Western Sahara and Mauritania of approximately 120 seals, and there is a smaller group. On land, they prefer sea coves and grottos that are not accessible from land. This is believed to be an adaptation to avoid human contact. This results in the death of pups as caves are dangerous for newborns. Generally, Mediterranean monk seals do not share their range with any other pinniped. Extensive hunting in the Atlantic and losses from fishing activities continue at present and because of the seals’ low numbers, genetic variability is low.

Monk seals are nonmigratory and spend most of their time within a very limited home range. They are the least social of pinnipeds.

The two living monk seal species are greatly impacted by human activities. This results from the presence of humans near their hauling out and breeding beaches and outright killing or prey competition from fisheries. The Mediterranean and Black Seas and nearby North Atlantic are heavily fished. Monk seals are viewed in some of these areas as pests and may be shot as competitors for fish resources.

They can suffer from diseases or shark attacks. In addition, they become entangled in fishnets and marine debris. The international endangered status of the two species is a result of their sensitivity to direct and indirect interaction with humans.

A small population of seals is growing on the main Hawaiian Islands. In 2000, there were 15 seals in the main islands and now,12 years later, there are 150-200.There are complex issues involved with the population increase in human-populated areas and among the main issues are the seals’ diet and interaction with fisheries. This has brought increased animosity toward the seals which has resulted in their deaths.The H? ike ? Maka Project addresses these concerns. The project wants to lay to rest some of the myths and misconceptions regarding the monk seals’ impact on the local marine environment and its resources. Seal-borne video cameras will study how they feed and use their marine habitat in the main Hawaiian Islands. More information may be found at http:www.monksealfoundation.org

The monk seal is being steadily driven toward extinction by tourism, fishing and pollution, which have markedly increased over the last 60 years. Gwen D. Goodmanlowe, Ph.D.

cm - 0.394 inches
m -  1 meter is equal to 3.28 feet
km - 1 km is equivalent to 0.6214 miles
Benthic: Living on or near the ocean floor.
Continental shelf: The part of a continent that is submerged in relatively shallow waters.
Dorsal: Situated on or toward the upper side of the body.
Pelagic: Living or occurring in the open sea.
Pinnipeds: ”Fin foot," referring to their often large fin-like flippers. All pinnipeds must come ashore to breed, give birth, and nurse their young. Seals, sea lions, and walruses are taxonomically related to other carnivores, including bears, dogs, raccoons, and weasels (including otters).
Seamount: A mountain rising from the ocean sea floor that does not reach to the water's surface and therefore is not an island.
Ventral: Located near or on the anterior or lower surface of an animal opposite the back.