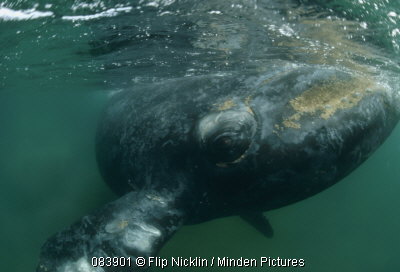 DERIVATION: from the Greek eu for right or true; from the Latin
balaena for whale and glacialis for icy or frozen.

It is not known whether the North Atlantic Right Whale can come back because of its low numbers. Habitat destruction continues to be a problem along with fishing activities and ship collisions. The whales migrate to this area every winter to birth their calves. They are on the verge of extinction, even the death of just one whale could affect the survival of the species.

Because it is a slow swimmer and easily approachable, the right whale is easy to kill. Since they float when dead, they became the "right" whale to hunt. Whaling has affected right whales more than any other cetacean, and today they are the most endangered, with 350 whales remaining. All whales have been DNA tested and are closely monitored.

Each whale has its own unique callosities which have enabled researchers to identify individuals. They have been found on fetal animals and newborn calves so they are not acquired by rubbing or irritation as was formerly believed.

Right whale bodies are rotund tapering to a relatively narrow tail. The large head, with its strongly arched upper and lower jaws, is one-fourth or more of their body length. Skin color is black to brown, they lack a dorsal fin and do not have ventral pleats. Their baleen is long (8 or 9 feet).

Females are larger than males as is the case in all baleen whales. The calving interval is usually 3 years, but could be 2 or 4. For such a large animal and slow swimmer, right whales are amazingly acrobatic. They are known for their leaping ability (breaching), throwing their 40-ton bodies into the air.

Dr. Roger Payne and his associates have studied right whales off the coast of Argentina since the early 1970s. When right whales are near to shore (July to November), they have been observed in a form of "play." They raise their immense tail flukes in the air, catch a breeze and "sail" downwind.

Before this species was so completely decimated by whaling, right whales were quite plentiful, numbering 100,000 or more.