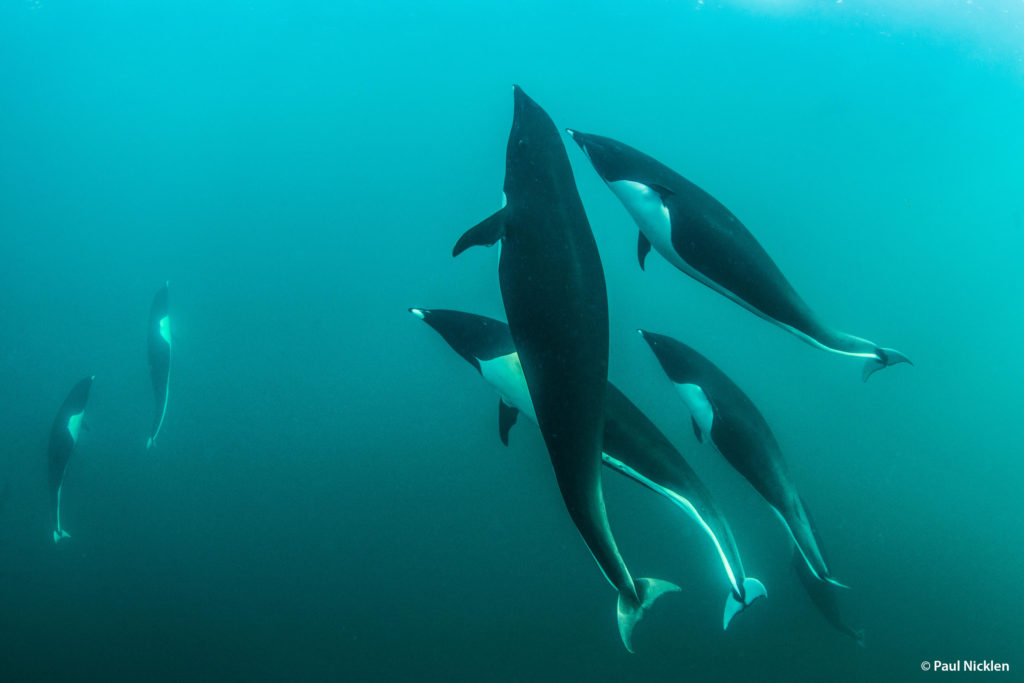 Physical Characteristics: Northern right whale dolphins are almost entirely black with a white patch that stretches from the throat down to the fluke notch. Young dolphins have muted color patterns of dark creamy gray to light gray. This species is the only small cetacean to have no dorsal fin, making them unmistakable when seen closely. Each animal has around 37-54 pairs of teeth in each jaw.

Feeding: The most common prey for these animals include squid and lanternfish. This is most common for those residing in waters off of Southern California. Other prey items include various types of fish and cephalopods.

Life cycle: The life cycle of the northern right whale dolphins has been best studied in the central North Pacific, which was based on large number of animals killed in squid driftnet fisheries. The calving peak appears to be in the late summer around July and August, and females have calving intervals of around two years. The gestation period lasts around 12 months and both sexes reach sexual maturity around 10 years old. The life span of the northern right whale dolphin is up to 42 years old.

Behavior: Northern right whale dolphins travel in schools ranging between 100 and 200 animals; however they have been known to travel in a group of up to 3,000 animals.  The groups are tightly packed and they have been known to group together with other marine mammals, most commonly Pacific white-sided dolphins and Risso’s dolphins. Northern right whale dolphins are very fast swimmers; they bowride especially when accompanied by other species of dolphins. Aerial displays are not uncommon as are breaches and sideslaps.

Distribution: Northern right whale dolphins are most commonly seen in the North Pacific only where waters are cooler and temperate. It is seen nearshore only where submarine canyons or other features bring deep water closer to the coast. The habitat of this species is deeper waters from the outer continental shelf to the oceanic regions.

Threats and status: Northern right whale dolphins often fall victim to accidental capture in various types of fishing gear meant for other species. Currently it is estimated there are around 68,000 in the North Pacific with roughly 20,000 residing in areas off the coasts of Oregon, Washington, and California.

Fun Facts: These animals are considered to be the slenderest of all cetacean species and have no dorsal fin, along with the southern right whale dolphin.

Source: Jefferson, Thomas A., Marc A. Webber, and Robert L. Pitman. Marine Mammals of the World: A Comprehensive Guide to Their Identification. London: Academic, 2008.