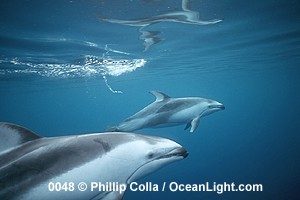 DERIVATION: from the Latin obliquus for slanting, sideways, and dens for teeth.

Pacific white-sided dolphins (PWSD) are one of the most common displays of the all-too-familiar aquariums. Known for their acrobatic antics in the wild, "Lags" (derived from their scientific name, Lagenorhynchus), are usually undisturbed by the presence of boats at sea and often approach them to bow-ride or surf on the ship's wake.

They usually travel in groups of 50 to several hundred; some groups are as small as 5 to 15, while others number more than a thousand (called shoals). They seek the company of other small cetaceans, particularly the northern right whale dolphin which has the same range.

PWSD range from the Gulf of Alaska in summer to Baja California in winter. Their migrations are not well understood, but there seem to be areas in which "resident" pods occur such as off the coast of Monterey, Southern California and northwestern Baja California.

PWSD are about 8 feet long at maturity. They have a large curved dorsal which is dark in front and has a light trailing edge. They have a pearl white belly, grey sides and a black back which has two white "suspender" stripes stretching from the head to the stock of the tail.

They stay mostly in temperate seas and most sightings have been between the seaward edge of the continental slope and the 100 fathom curve.

Calves are approximately 3 feet long at birth which occurs in summer or fall. Sexual maturity is sometime between 6 and 10 years of age. Gestation is 10-12 months. PWSD have 21-28 small pointed, slightly curved teeth on each side of the lower jaw; 23-43 teeth on each side of the upper jaw with which they eat a variety of food. They prefer squid, herring and anchovies. Judging from radiotelemetry, feeding is done predominately at night. At dawn and dusk, they have been observed feeding with gulls on balls of unidentified bait fish.

PWSD are taken for food in Japanese coastal fisheries; others are killed in North Pacific salmon drift and gill netting operations.

In the last 25 years, they have been captured for zoos and aquariums. Fifty percent of captured animals die within 2 years of capture. In captivity, PWSD live less than 5 years, while in the wild their life expectancy is 30-40 years.