DERIVATION: from the Latin globus for globe-ball; from the Greek
kephale for head, and melanus for black.

A common name for pilot whales is Blackfish.

One of the mysteries of whale behavior is the tendency of some species to beach themselves. Probably the most common cetacean to strand is the pilot whale. The reasons for this behavior are not understood. It is speculated that perhaps parasitic infestations interfere with the animals' hearing or receiving faculties; underwater sounds confuse the animals; they are fleeing from predators; or it is a form of mass "suicide." It has been suggested that mass strandings could be caused by navigational errors made by whales in regions characterized by anomalies in the Earth's magnetic field.

Their death is caused from overheating or by being slowly crushed to death by their own weight, or drowning when tide covers their blowholes.

People have worked, many times in vain, to return them to the ocean. Rescue efforts to save pilot whales meet with varying degrees of success. On one occasion, 44 whales were rescued and only 5 died when they came ashore near Sydney, Australia. But in December, 1990, only 8 whales were successfully returned to the ocean in Hyannisport , Massachusetts , and 45 died or were lethally injected to end their suffering.

One of the largest strandings occurred in Jacksonville, Florida in 1977. Hundreds of pilot whales beached near a naval base called Mayport. Rescuers tried in vain to take the whales to open water, and the whales would swim back to shore where they lay dying on the hot sand. Marine biologists and zoologists rushed to examine the bodies, perform autopsies and take tissue samples. The Smithsonian sent specialists, but by the time they arrived, the bodies were badly decomposed and no reliable information could be extracted. The cause of the tragedy is unknown.

As a measure of their intelligence, we only have observances of pilot whales raised in captivity. They have demonstrated substantial intelligence in performing their tasks. They have also been used by the military to do tasks previously performed by dolphins. They have assisted in the rescue of sailors trapped in crippled submarines, detected and recovered mines and other unexploded ordnance.

Features of pilot whales are a bulbous forehead (possibly exaggerated in adult males) and a short, almost imperceptible beak, a prominent, falcate dorsal fin with a long base located in front half of back.

They are known to assemble in groups of hundreds at a time, although it is more common to see them in groups of a few dozen. Group cohesion is particularly strong and this has enabled humans to more easily kill them.

In the water the whale appears to be slate gray to black all over. However when it is on the beach and dry, it is dark chocolate. They usually have a patch of grayish white on the throat, and a pale stripe along the midline of their underside. In the North Atlantic , some of the larger animals have a gray saddle behind the dorsal fin; this feature is more prevalent in the southern hemisphere. Some herds have a conspicuous gray streak behind the eye in the shape of an elongated teardrop. Young animals are usually paler than adults. There are eight to twelve pairs of peglike teeth in the upper and lower jaw. Long-finned whales are widely distributed in cold temperate waters of the North Atlantic and the southern hemisphere. 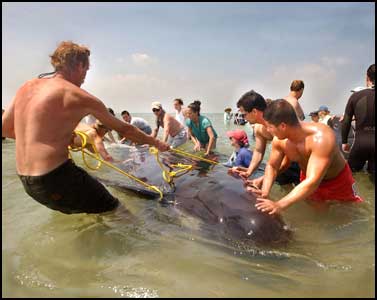 Mating is usually in the spring and early summer, gestation lasts for 16 months and calves nurse for 20 months - one of the longest periods of calf dependence known in cetaceans. Sexual maturity in females is about six years; in males, twelve. Calving intervals are probably three years. Life span is estimated at 40 to 50 years.

They have been studied most extensively in Newfoundland where they arrive inshore in June or July where they remain until late October or November. Their winter grounds are believed to be offshore, in waters influenced by the Gulf Stream . Apparently, some pilot whales spend all of their time in offshore waters.

Entire groups of pilot whales have been seen at the surface apparently resting with no apparent motion. They will sometimes hang in the water vertically with their heads and forepart of the flippers exposed (spyhopping). They commonly lobtail (slap the surface with their tail). Infrequent breaching is usually done by younger animals. Dolphins are sometimes sighted in or near pilot whale herds.

Naval studies have shown that a pilot whale can dive deeper than 2,000 feet on command. Squid is the favored food of pilot whales and determines their movements. Cod and other fish are eaten when squid are not available.

Long-finned pilots have been heavily exploited and the largest fishery at present is that in the Faeroe Islands (part of Denmark), which has been ongoing for centuries.

Short-finned pilots are more tropical than the long-finned and appear off Southern California in early spring with the arrival of spawning squid. Their general appearance is similar to the long-fined pilot whale. They are smaller and their flippers are proportionately shorter. Gray ventral markings are less bright, but the post-dorsal saddle marking is often large and conspicuous. The marking behind the eye is present but less distinctive. They have from seven to nine peglike teeth in each side of the upper and lower jaws.

The short-finned pilot whale is cosmopolitan in tropical and warm temperate waters. Its distribution in the southern hemisphere is not well known, it probably inhabits a large part of the warm waters of the Indian Ocean and along the coasts of northern Australia.

They have been frequently killed in the tropics, particularly southwestern Africa and the West Indies by nineteenth century whalers. Sporadically, drives (pushing whales toward the shore where they are slaughtered) have been conducted off of Japan and Okinawa. The irregular exploitation of short-finned whales has apparently allowed the species to remain abundant and widely distributed.

About 1,700 Faroese children have been the subject of a study that has been ongoing for nearly 20 years. The tests strongly imply that the consumption by mothers of mercury-tainted seafood - primarily whale - damages fetus' brains. Once a year, the children undergo tests to see if their intelligence has been affected in subtle ways.

The recent results of tests on these children at age 14 suggest that some of the neurological effects are long-lasting, and may be permanent.

The remote Faroe Islands are part of Denmark and are just below the Arctic Circle . The children are so highly exposed because the Faroese eat the blubber and meat of pilot whales, which contain mercury concentrations 100 times greater than fish. The whales eat fish with the metal, which builds up in the ocean by emissions from power plants and other industrial operations. 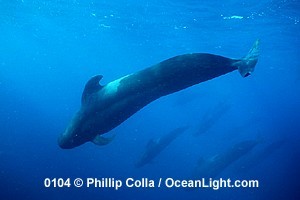 The pilot whales are killed in traditional slaughters called grindabod. The islanders drive pods of pilot whales to beaches and slit their throats. A video of this gruesome slaughter has aired on national television several times.