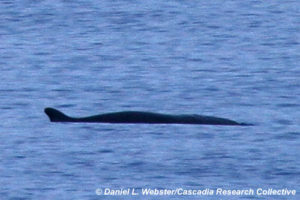 DERIVATION: Kogia is probably a Latinized form of the English word “codger,” for a “miserly old fellow”; Kogia also has been attributed to a Turk called Cogia Effendi who observed whales in the Mediterranean. From the Latin brevis for “short” and from New Latin genitive of “cepitis” for “head.”

The species was not generally recognized until the mid-1960s. The name simus was changed to sima to reflect proper nomenclatural gender. Molecular genetic variation learned from a recent study suggests that there may be two separate species of dwarf sperm whales: one in the Atlantic and one in the Indo-Pacific.

Characteristic Shared by Pygmy and Dwarf Sperm Whales
An unusual characteristic that distinguishes pygmy and dwarf sperm whales from other cetacean species is the use of the "squid tactic." Each species has a sac filled with liquid in the lower portion of the intestine. These animals are capable of ejecting up to 13 quarts (12 liters) of viscous, dark reddish-brown liquid when they feel threatened or when trying to evade predators. Release of the ink is similar to behavior by squid and other cephalopods, and creates a dense cloud that acts to discourage predators and as a confusing diversion that allows the whale to escape. (Reeves et al. 2002).

Physical Characteristics: Pygmy sperm whales are small members of the toothed whale group, and one of two species in the family Kogiidae. They reach lengths of up to about 11.5 ft (3.5 m) and weigh between 700-1,000 lbs (315-450 kg). Much of the information on distribution and biology comes from examination of stranding specimens as they are not often seen at sea. Pygmy sperm whales have a small, compact body that tapers near the tail and has a small, low, rounded dorsal fin. The shape of the dorsal fin varies depending on the individual. The head is sometime described as "shark-like" due to a conical, pointed snout, and a small narrow, distinctive, underslung lower jaw. Unlike dwarf sperm whales, this species does not have irregular grooves or creases on the throat. Pygmy sperm whales lack teeth in their upper jaw, but have 10-16 pairs of teeth in the lower jaw that fit into sockets in the upper jaw. Their "bulging" eyes are dark with a light circular mark above and around them.

Behind the eye is a pale false gill plate, which looks similar to a fish's gill cover. Like their larger cousin the sperm whale, pygmy sperm whales have a spermaceti organ and single blowhole situated slightly to the left side of the body. While on the surface, they have a low profile due to the level position of the head and back. Only when closely observed, the skin is wrinkled (like its larger relative, the sperm whale) and has a brownish to dark bluish-gray coloration on the dorsal side. The ventral side is paler with whitish to pinkish coloration that gives little whale a counter-shading effect.

Life Cycle: Pygmy sperm whales become sexually mature at 4-5 years of age. Gestation in these cetaceans is probably about 9-11 months. The mating and calving season lasts about nine months, and peaks from March-August in the Northern Hemisphere. Newborn calves are about 3.9 ft (1.2 m) in length and weigh 110 lbs (50 kg), and are probably weaned after a year. Females may also give birth to a calf in consecutive years. The estimated lifespan for this species may be up to 23 years.

Feeding: Pygmy sperm whales are believed to be capable of diving to at least 1000 ft (300 m) in search of food. They also probably use echolocation to locate prey. Their diet consists of cephalopods (e.g., squid and octopus), crustaceans (e.g., crabs and shrimp), and fish. Based on the structure of their lower jaw and analysis of stomach contents, these animals forage and feed in mostly mid- and deep-water environments, as well as near the ocean bottom. They may feed in slightly deeper waters than dwarf sperm whales.

Behavior: This species is frequently seen at the surface either alone or in small groups of up to 6-7 animals. These groups can vary/mix based on age and sex, but little else is known about their social organization. Pygmy sperm whales are rarely active or aerial at the surface, and it is very uncommon for them to approach boats. Usually they are seen slowly swimming (3 knots) or “logging” at the surface, showing only a small portion of their body. Before diving, they will slowly roll or sink and disappear from view without displaying their flukes. This species is very difficult to observe at sea given their timid behavior, lack of a visible blow, and low profile/appearance in the water. They are usually only detected in an calm sea state with low wind speeds and little or no swells.

Individuals or female/calf pairs often strand alive. Taken to aquariums, they die within a few days or weeks.

Distribution: Pygmy sperm whales prefer tropical, subtropical, and temperate waters in oceans and seas worldwide. They are most common along the waters seaward of the continental shelf edge and the slope; and in most areas are thought to be more "oceanic" and "anti-tropical" than dwarf sperm whales.

The pygmy sperm whale appears very similar to the dwarf sperm whale. The two species differ slightly in physical size, morphology, and other minor features. In the field, it is very difficult to distinguish between the two species because they can be so easily confused. The geographic distribution and range for these species may overlap in some areas. Both species are poorly known due to the limited availability of information and are considered "rare."

Pygmy sperm whales have a cosmopolitan distribution in temperate and tropical seas worldwide. In the Southern Hemisphere, their range includes Chile, South Africa, the Tasman Sea, and Uruguay. In the Northern Hemisphere, their range includes the Netherlands, northwestern Europe, the Azores, Nova Scotia, Washington, Hawaii, and Japan. Kogia (the genus that both pygmy and dwarf sperm whales belong to) may be more common off the coasts of the southeastern United States and South Africa based on the records of higher numbers of strandings in these areas. The seasonality and migration patterns of this species are unknown.

Threats and Status: Pygmy sperm whales are incidentally taken as bycatch in fishing gear that includes driftnets, gillnets and purse seine operations. This species was killed occasionally by hunters targeting sperm whales during the 19th century and have been recently taken in commercial harpoon fisheries in Indonesia, the Lesser Antilles, and Japan. Due to their behavior of logging motionless on the sea surface, they are occasionally subject to ship strikes. Some stranded whales have been documented with plastics and other garbage blocking their guts. Stranded specimens have also been documented with degenerative heart disease, immune system problems and heavy parasite infestations. This species of whale may be sensitive to underwater sounds and anthropogenic noise. Anthropogenic noise levels in the world's oceans are an increasing habitat concern, particularly for deep-diving cetaceans like pygmy sperm whales that use sound to feed, communicate, and navigate in the ocean.