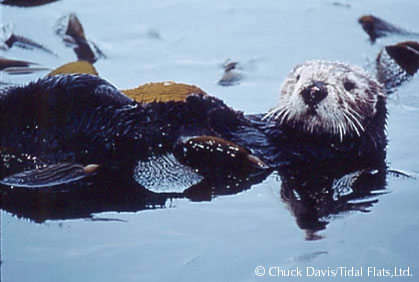 Sea otters are a well-known inhabitant of the California and Alaska coasts. Although they were hunted nearly to extinction in the 18th and 19th centuries for their fur, they are making a slow but steady comeback. The historic world population of 150,000 to 300,000 animals was plunged to fewer than 2,000 and the California population was decimated. About 50 animals survived in a colony near Big Sur, California. Now federally protected as a threatened species, sea otters are recovering. In the spring of 2011, there were 2,711 otters in California, and more than 150,000 world wide.

Otters are most closely related to weasels. The otter lifestyle is very simple: most of their lives are spent sleeping, playing, eating and grooming. These activities extend to sea otter pups as well. They are kept under the watchful eye of their mothers, upon whom they are completely dependent, for the first year of life.

Otters spend their entire lives in very cold water, so they need to maintain a high metabolic rate in order to keep warm. For this reason, they must eat constantly, consuming almost a third of their body weight every day. Most otters tend to eat slow-moving prey such as snails and crabs, instead of the speedier fishes.

Cleanliness is a serious matter for sea otters. They are the hairiest mammals on earth with over a billion hairs covering their bodies. A small spot on their soft pelt can lead quickly to hypothermia, so otters are fastidious about grooming every inch of their bodies several times a day. It is also essential that their undercoat trap enough air to keep them buoyant and well insulated. They accomplish this by fluffing their fur and blowing into it. Their loose skin allows them to pull into reach any areas on their body which might otherwise be inaccessible.

Sea otters usually sleep by wrapping themselves in kelp to ensure that they do not drift. They sleep in the early morning, afternoon, and evening, with periods of activity in between.

Sea otters go through an interesting mating ritual. Reproduction tends to be violent, with the male otter biting the female on the nose and holding her underwater for extended periods of time. This alternates with playful chases through the kelp as the female tries to escape, but it's never too long before the male catches her again.

Female otters are kept busy caring for their young pups who are noisy, impatient, demanding and constantly hungry. Pups also require constant grooming by their mother.

The Sea Otter Research and Conservation program at Monterey Bay Aquarium is the only program in the world that rescues and returns sea otters to the wild. Since 1984, it has saved the lives of many otters. In addition, it generates information about the care of sea otters that is vital to their survival in the event of an oil spill or other disaster along the coast.

Otters and Felines
Make the Connection

The actions of people can indirectly affect marine mammal health. The takes place in a number of ways such as through infectious agents in sewage including bacteria and protozoa. One recently identified parasite in marine mammals is Toxoplasma gondii. It relies upon a cat (domestic or wild) to maintain its life cycle. Therefore, its presence in sea otters, dolphins, seals and sea lions is curious and sounds an alarm as to how it has reached these marine mammal hosts without apparent contact with cats. Salmonella and camplylobacter are known to cause diarrhea in humans and terrestrial livestock. It has been cultured from seals and sea lions and the bacteria shows antibiotic resistance which demonstrates exposure to the drugs before they infected marine mammals.

Toxoplasma gondii has shown up in 40 percent of sea otter carcasses. Dr. Mike Murray, Monterey Bay Aquarium veterinarian, said that this is a rate “unprecedented in any other wildlife species.” It occurs from cat feces that washes into the ocean via storm drains or sewage treatment plants when cat owners flush their litter box waste or scatter them in their gardens.

Toxoplasma gondii is able to survive for months on land and is not filtered out by soil when rain washes it into storm drains and into the ocean. Domestic cats are not native California species so sea otters have no resistance to the organism.

California Assembly Bill (No. 2485) has been introduced by assemblymen John Laird D-Santa Cruz and Dave Jones, D-Sacramento that would require the manufacturers of cat litter to label their product urging disposal of cat litter in landfills rather than in places where it might eventually end up in the ocean.

Santa Cruz, CA - The annual survey of sea otters off the California mainland shows a count of 2,882, and that is an increase of 90 compared to the prior year. This more than three percent increase is a reason for cautious optimism. Scientists also are now including a population of previously uncounted otters at San Nicolas Island in Southern California, bringing the total to 2,941.The annual survey uses a three-year average to account for variations in counting methods. Sea otter strandings continue to be high and the reason unknown.

Great white sharks off the coast of Southern California are killing large numbers of sea otters. Sharks don’t eat otters but the large number of dead otters showing up are from shark “tasting bites.” This mystery is under scientific scrutiny including whether large numbers of inexperienced juvenile sharks are the cause. Once close to extinction, the otter population must exceed 3,090 for three consecutive years to be considered for removal from a federal threatened species list.

While deaths from great white sharks is somewhat of a mystery, the population in the central portion of California north to Monterey appears to be having food supply limits leading to declines in otter numbers. In the Monterey Bay area, cyanotoxins and domoic acid, both occurring from natural algae blooms, appear to factor into mortality in this area.