DERIVATION: from the Greek physeter for blower, makros for long, and kephale for head.

Moby Dick is the most famous whale who ever lived. Herman Melville based his renowned novel on an actual sperm whale. The real Moby Dick was not really an albino; only his forehead and hump were white.

For all that has been written of the sperm whale, their life history is still greatly unexplained. Their horrendously deep dives are known, not from observation, but because of numerous instances where dead sperm whales have been found entangled in deep-sea cables set at 3,000 plus feet. At this depth, the water is totally black as no light penetrates from the surface.

The dead whales, in many cases, were found with cable wrapped around their lower jaw, indicating they were swimming with their lower jaw open while trolling for food. It is believed that large males make these extreme dives where they battle and consume giant squid. No person has ever seen a struggle between a 60-70 foot whale and a giant squid which can reach lengths of 60 feet. We know they exist from battle scars found on sperm whale bodies and remains of giant squid found in the whales' stomachs. 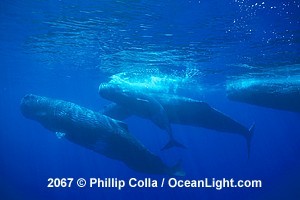 The usual food of sperm whales are squid less than three feet in length and the amount a whale consumes can be enormous. Thirty thousand beaks have been found in a sperm whale stomach indicating they had eaten 15,000 squid as squid have upper and lower mandibles.

Ambergris is a valuable substance found in the lower intestine of a small percentage of sperm whales and is believed to form around squid beaks. This waxy substance, which is lighter than water and floats, was primarily used as a perfume fixative. In whaling days, a whaler could make a fortune from ambergris obtained from a single slaughtered sperm whale.

Spermaceti is another valuable substance found within the body of a sperm whale. Within its head is an enormous lump of muscle and fatty tissue weighing approximately 15 tons and filled with four tons of the clear liquid, spermaceti. This liquid was the main reason sperm whales were hunted as the liquid, when cooled, could be made into candles and other items. Between 1835-1872, 292,714 whales were killed by the American whaling fleet. The head of one sperm whale could yield 2,000 gallons of oil which was used to illuminate 19th century homes. 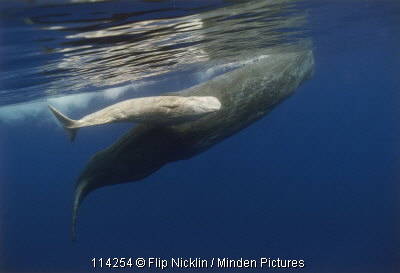 The sperm whale is a toothed whale -- the only one of the large whales with teeth. Their teeth, only found in the lower jaw, are not used for chewing, as their food is eaten whole.

The color of sperm whales varies. They can be grayish brown or black. Their flukes are broad and triangular and deeply notched and straight across on the margin.

Their single blowhole is located left and forward on the head. They are the only whale with a 45° blow.

Males are larger than females and reach lengths of 60 feet or more; females average 40 feet. Newborns weigh a ton at birth.

The life history of sperm whales is complex and not totally understood. They are found in all the world's oceans. Migratory behavior between males and females is different. Factory whaling of sperm whales was discontinued in 1979, but they are still hunted from shore stations in various countries. Their flesh is considered inedible by humans, but is used for animal food, and their oil is used for industrial products. This is the animal with the largest brain in the world. 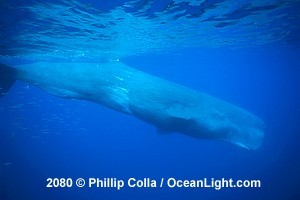