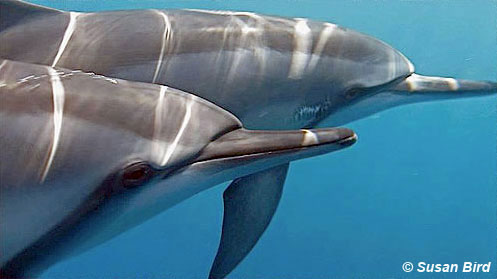 DERIVATION: from the Latin longus for "long" and rostrum for "beak, snout."

Characteristics: It is slender species with an extremely long, thin beak and a very slender head, the flippers are slender and recurved. They have 40-62 pairs of very fine, pointed teeth in each jaw with some differences between subspecies. These are more teeth than in any other cetacean species, with the exception of franciscana and some long-beaked common dolphins. Their color consists of shades of dark gray, light gray, and white. Most spinners have white bellies.

Feeding: Most spinner dolphins are night feeders. They feed on many midwater fish of different families, squids and sergestid shrimps and rest during the day. Dwarf spinner dolphins (S.I. roseiventris) presumably feed during the day on small, reef-associated organisms (benthic reef fishes and invertebrates).

Behavior: School sizes vary greatly, from a few dolphins to a thousand or more. Spinner dolphins school with pantropical spotted dolphins, S. attenuata, as well as dolphins and small toothed whales of other species and even with dugongs (Psarakos et al., 2003; Kiszka, 2007).

No one knows why the spinner dolphin spins. This marine mammal is capable of spinning seven times on its axis. The spin begins with a powerful acceleration under the water and the torque of the tail just as the dolphin breaks the surface. Some theories are that spinning:

The whistles and burst pulses of spinners have been studied extensively for the past several years (Lammers et al., 2006). They vary in complexity with the animals’ geographical location and their activity. Their functions are only beginning to be understood.

Distribution: They may be found resting in the sandy-bottomed bays of oceanic islands and coral atolls, but much of their range is oceanic, particularly in the eastern tropical Pacific. The dwarf spinner (S.I. roseiventris) may be found almost exclusively in shallow waters in southeast Asia and northern Australia. It appears to feed over shallow reefs. They are found in the Red Sea and Persian Gulf but not in the Mediterranean Sea.

Threats and Status: Sharks and orcas (killer whales) are threats, but humans have done the most harm. Since the early 1960s, large numbers have been killed by tuna purse seiners in the eastern tropical Pacific. The population of S.l. orientalis is estimated to have been reduced to less than one-half of its original size. Since the reduction of reported purse-seine mortality more than a decade ago, the population has grown at an annual rate of less than 2% which is lower than the expected rate of about 4%. High rates of bycatches in drift nets and purse seines occur in the Philippines that is unsustainably high. Concern is growing over harassment by dolphin-watching boats in several localities in Oceania and Southeast Asia (IUCN Redlist). 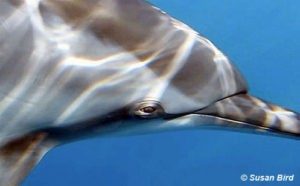