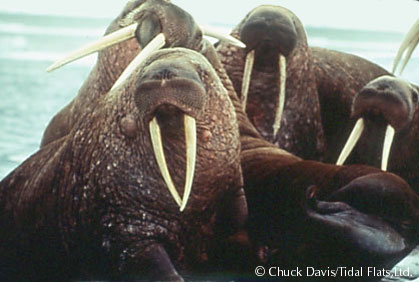 DERIVATION: Odous or odonto means "tooth"; baino (Greek) means "I walk," referring to the fact that tusks are something used to help the walrus move about. Rossmaal or rossmaar (Norwegian) is derived from the Scandinavian word for walrus.

Physical Characteristics: The walrus is a large pinniped; seals and sea lions are also pinnipeds. In the Pacific, adult male walruses reach about 3.6 m in length and weigh 880-1,557 kg; adult females are about 3 m and 580-1,039 kg. In the Atlantic adults are slightly shorter and lighter.

Both males and females have ivory tusks that are used for defense against predators, interspecies aggression, and as an aid for hauling out on ice. It is the only living pinniped with external tusks.

Walrus skin is very thick and the male's wrinkled, heavily scarred hide is covered by cinnamon brown hair. In adult males, their massive neck and shoulders are covered with wartlike nodules. A female has more hair throughout her life. Males shed most of their hair in June and July; it is replaced in July and August. Shedding in females is less well defined. Molting in walruses is more prolonged than in most other sparsely-haired pinnipeds. Calves have short, gray to gray-brown hair and their flippers become black within two weeks after birth.

Its head is small relative to its bulky torso. Its broadly flattened muzzle has stiff, colorless whiskers (vibrissae) and paired vertical nostrils immediately above its bristles. Its often-bloodshot eyes are set high on the sides of its head.

Because of air sacs in their throat, they can sleep with their heads held up in the water. These sacs act like a life preserver. A thick layer of fat insulates the walrus in the cold Arctic waters. Their nostrils are closed in the resting state.

Life Cycle: It is believed that copulation occurs underwater and that attachment of the fertilized egg to the uterine wall is delayed for 3 to 3.5 months. Pups are born approximately 15 months after conception. Newborns are 1 to 1.4 m and weigh 33 to 85 kg. Sexual maturity is attained in Pacific females at around eight years. Males are capable of mating successfully by the age of ten, but they seem socially incapable of competing for mates under natural conditions until they are approximately 15. Birth takes place between mid-April and mid-June but usually in May. Females in their prime give birth usually once every 3 years.

Calves may nurse for as much as two to two-and-a-half years. A nursing mother sometimes assumes an upright posture in the water. A pup may hang upside down, with its rump and hind flippers exposed as it nurses. Walruses nurse on land or ice, but aquatic nursing appears to be more common in walruses than in other pinnipeds. No other pinniped gives such a consistently prolonged period of lactation and maternal care to their pups.

A pup often rides on its mother's back, especially when fleeing from danger. A mother will use her fore flippers to grasp her pup and dive with it when threatened. The solicitude displayed for their young has surprised many hunters. An Alaskan mammalogist observed a mother walrus use her tusks to break apart a large piece of ice to free her pup who had fallen into a crevice.

They can live to the age of at least 40. Because of their low rate of reproduction, compared with other pinnipeds, they have a relatively high survival rate. Mercury and organochlorine pesticides levels in walrus tissue in tissue from northern Baffin Bay are low compared to levels found in most other pinnipeds.

Feeding: They can dive up to 300 feet to obtain their favorite food from the sea bottom: clams. Their diet also consists of snails, mussels and 40 other kinds of invertebrates. If very hungry, they will eat seals. They are primarily bottom feeders and may dive for up to ten minutes. This practice means that they require access to shallow banks and coastal areas. They feel their way along the bottom with their sensitive whiskers and apparently suck clams from their shells. As many as 3000 to 6000 tiny clam siphons can be ingested in a single feeding session. The idea that tusks are used for digging clams and other food is almost certainly wrong because of the patterns of wear on their tusks and facial bristles. In addition, observation of captive walruses feeding discounts this notion.

Behavior: They are usually found in herds, especially when onshore. Walruses are very gregarious and often found in groups from the tens to the thousands. During the nonbreeding season, males and females are sometimes segregated, but on certain traditional summer and fall haulout grounds, both sexes and various ages are represented. The compact huddling of walruses when they are hauled out does not automatically mean that their social associations are totally amicable. An individual may compete for a more favorable spot and use their tusks and body size to win or maintain social status. They congregate in harems with the large bulls assembling numerous cows into groups. The bull defends his group against competitors and mates with cows in the group. Aircraft can cause stampedes into the water by all the walruses at a haul out site, which may result in the calves being crushed.

The Pacific walrus population is believed to have doubled between about 1960 and 1980 and reached a maximum population of more than 200,000. By 1978, the reproductive rate was declining as the population approached its environmental carrying capacity. The combined annual kill of walruses in Alaska and the former Soviet Union at least doubled during the early 1980s and it is now believed that the population is declining. Pacific walruses spend most of their lives associated with sea ice and migrate with the ice as it expands and moves south in the winter and breaks up and retreats in the spring and summer. Males often separate from the females in late spring and during the summer they use land haulouts some distance from sea ice, while the females, their calves, and most of the juveniles follow the retreating sea ice edge north

The North Atlantic populations did not make a similar recovery to the Pacific population. There may only be from 1800 to 2000 walruses in the northeastern Atlantic today. Protection from commercial hunting since the early 1950s has lead to recolonizing the waters around Svalbard. The walrus population in Greenland's Thule district may be stable but the population off central west Greenland remains depleted.

Threats and Status: The walrus lives on the edge of the Arctic ice sheet and is often hunted by polar bears and killer whales (orcas). The predators however may be the ones injured as walruses fight back, and sometimes, they even cause serious injury to their attackers.

Native people in all of the polar regions continue to hunt them with high-powered rifles and motorboats. Many shot walruses are not recovered and those that are recovered are used only for their ivory. Since 1972 coastal Alaska Natives have hunted walruses in the United States for subsistence purposes under an exemption provided in the Marine Mammal Protection Act. Regulations on harvest are in place in Canada, the Russian Federation, and Greenland. Norway prohibits all hunting at Svalbard. Human occupation, whether it is Native villages, industrial sites or military installations, appear to endanger the terrestrial hauling out of the animals and some traditional grounds are no longer available to the walrus.

Direct conflicts with fisheries are uncommon; however, trawl fisheries could disturb important benthic feeding areas. Human disturbance at land-based haul-out sites, low-level aircraft over-flights and near-shore passage of vessels can have serious effects on walruses out of the water, as they are highly susceptible to disturbance and easily panicked into stampedes.

Global warming and any associated reduction in the extent, timing, and characteristics of seasonal sea ice cover could negatively affect walruses, especially the Pacific population. Declining sea ice reduces suitable strata for pupping and breeding aggregation and limits access to offshore feeding areas. In the Atlantic where the use of coastal haulouts is more widespread, reduced sea ice cover could increase feeding opportunities for walruses.

Reduction in sea ice could also lead to the addition of commercial sea lanes in currently rarely visited portions of the walruses’ range, with increased risk of spills and discharge of pollutants, disturbance and coastal development. A history of poor international cooperation, crude population monitoring methods and delayed management responses has led to speculation that future management actions in response to population declines of Pacific walruses may not be taken soon enough to be effective.

Lewis Carroll memorialized the walrus in:

The time has come, the Walrus said,
To talk of many things:
Of shoes - and ships - and sealing wax
Of cabbages - and kings -
And why the sea is boiling hot -
And whether pigs have wings.